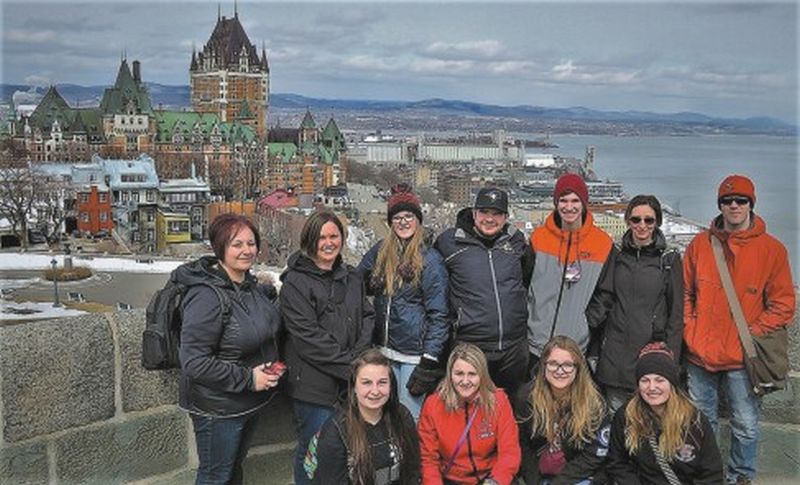 The trip, specifically designed for French immersion students, had an historical and a broad cultural component.

“It was to get the students acquainted with Francophone culture in Canada,” says Mélanie Simard, Grades 10 and 11 French immersion teacher at G. P. Vanier and the Alberta representative on the ACPI board. (Canadian association for Immersion Professionals)

“We have a Francophone culture here but the kids needed to experience where that started and the experience of being absorbed in a totally French environment, the whole living in French and having to speak French.”

The group fit numerous activities into their four-day visit; with a geo-rally of old Quebec City and a ghost tour of the old quarter at night.

They visited the Parliament Building of Quebec, built in 1886 and toured the national historic sites that are part of Quebec City fortifications such as the Citadelle, the Plains of Abraham, and the Martello Tower, where the students gained an interactive perspective of a soldier’s life in the early 1800’s.

They went to beaupré coast, to the Basilica of Sainte-Anne-de-Beaupré, and visited the spectacular Montmorency Falls.

“We even took a cooking class at a culinary arts school where we cooked our own amazing lunch,” says Simard.

It was G. P. Vanier’s first school trip to Quebec and a first time visit for each student.

“What I liked about the tour is that it wasn’t just about the historical aspect, it was cultural too. Like the places we would go to for breakfast and supper were really nice restaurants where they really got to experience the food,” says Simard.

From the students’ perspective, the trip was an unqualified success as they thoroughly enjoyed all the activities.

As most of the kids are from a French background with roots in Quebec they were also pleased and proud to discover that part of their cultural heritage.

Simard said that the kids found it interesting to have to use French rather than English all the time and that they were proud to be able to communicate well in their second language.

“Although all activities were a hit, the Martello Tower interactive defence of the Plains of Abraham and the culinary class were the two favourites,” she says.

“And I think generally speaking, they were fairly proud of their French when they came back because they were complimented on it when they were there, which was nice to see because they gained some confidence.”