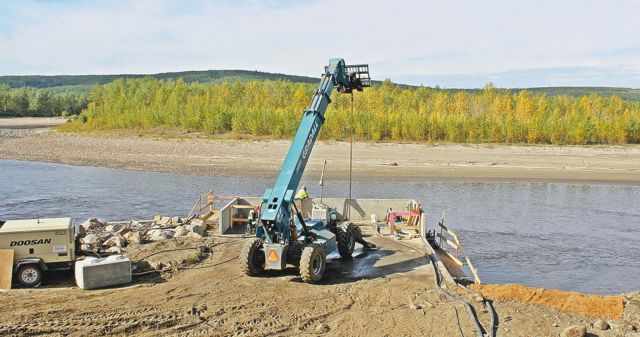 The gates at the site were not operational and substantial work was required in order to continue to pump river water.

Ten years ago, the four gates of the intake system were built into the river as part of a structure divided into two independent compartments.

The two compartments allowed portion of the intake system to be isolated and cleaned of silt and other buildup. However, the gates were jammed open, which prevented cleaning.

Alberco, an Edmonton based construction company that specializes in bridge construction and water infrastructure won the contract to repair the intake system and began mobilizing its specialized equipment and setting up office on the site July 31.

On August 8, the crew returned and began the complex process of putting in the dam in order to work on the structure and replace its gates.

The dam was a key facet of the project, allowing the crew to get below the water surface to fix the concrete and replace the gates.

This particular dam was custom designed for the Smoky River Water Commission project taking into the account the unique dynamics of the river and the site.

The dam design was also an important factor in the price of the project.

Due to its innovation and efficiency, it brought the Alberco tender in substantially less than the next highest bid.

In preparing to install the dam, an operation that involved placing numerous large and extremely heavy concrete blocks in the river to divert the flow, Alberco also took out five feet of silt right across the intake, a process requiring 29 hours of vac truck.

“It was very interesting to watch them put in the dam,” says SRRWMC manager Marco Gervais, who was initially told that the structure was seriously undermined because the original concrete froze before setting and problems with air entrapment.

However, that position has been reviewed and the situation is less drastic than they thought.

“Now it is starting to look like it is regular wear and tear from the river, from the ice and debris because you just look at it and the damage is all at the same level.”

The site boss overseeing the project has worked on bridges for over twenty years and says that all bridges have nosecones to protect the structure from the force of the river and that a nosecone at the Little Smoky site would also serve as a buffer against the impact of river ice and debris.

The new gates will slide up on down on two corresponding shafts on either side of each gate, offering greater stability than the old system, which moved on one central shaft making them prone to going off kilter and jamming.

The new gates are also power operated unlike the older system that was manual.

There will be no interruption to consumer services for the duration of the intake project, which Gervais estimates will be completed by the end of September.