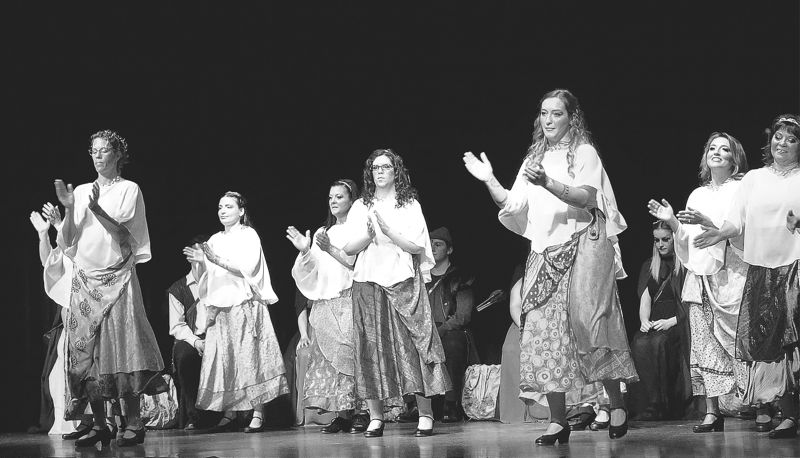 The election of the carnival King and Queen was also an elaborate process, with the kids who were vying for the crowns also dressed in the enchanted forest theme with Robin Hood style hats with quivers and arrows.

Mason Lavoie was appointed King and Anique Tardif of Peace River took the crown as Queen.

While the Carnaval always offers many new performers and novel activities, it also keeps the annual favorites, those activities that are synonymous with the winter carnival: Ice sculpting competitions, hayrides, bonfire, fireworks, maze, games and tobogganing.

The entertainment line-up has some familiar acts including Roger Dallaire, Daniel Gervais and Isabelle Cliché,

Daniel Gervais and his Band performed on opening night. Gervais is a renowned musician who was Canadian Grand Master Fiddler in 2012 and 2016. Members of his band included Travis Switzer, Raphaël Fraynet, Roger Dallaire and Mathew Gervais.

In keeping with the Alberta-Francophone celebration, Minister McCuaig-Boyd, addressed the audience in French, saying she was pleased to be present at the Carnaval and to bring greetings on behalf of Ricardo Miranda, Minister of Culture and Tourism.

In reference to this year’s enchanted forest theme, McCuaig-Boyd said that such a theme could only bring some extra magic to the event.

“Through the music, food, and artists the Carnaval de St-Isidore expertly showcases francophone culture,” she said and added that the Carnaval “brings people together to learn, share, and revel in the growth of a community.”

McCuaig-Boyd also pointed out that there are 270,000 French speakers in Alberta and that Francophone community is an important part of this province’s culture and history.

Fortunately, the recent deep freeze had loosened its grip on northern Alberta on opening night though the temperature was minus-16 the wind chill made things a little more bracing.

However, the temperature was perfect in many ways for such an event: not too cold but cold enough to keep the ice sculptures intact and to create a perfect winter carnival atmos- phere.

The annual three-day celebration has offered an authentic Franco-Albertan cultural event since 1982.

While the Carnaval de St-Isidore has remained true to its traditional roots, preserving its core, northern Albertan ambience, it also continues to reinvent itself by incorporating contemporary musical and cultural francophone acts and entertainment each year.

“The Carnaval Forêt Enchantée was an overall success considering the cold factor, with awesome participation from all over the region and Alberta,” says Rachelle Bergeron a member of the Carnaval organizing committee.

“Exceptionally beautiful decorations and snow sculptures this year, notably the professional sculpting competition. Our great line up of local and provincial artists and the awesome band Bodh’aktan from Québec, were really well appreciated.”