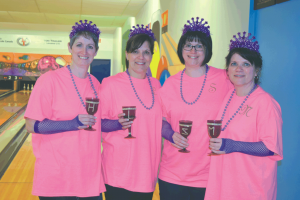 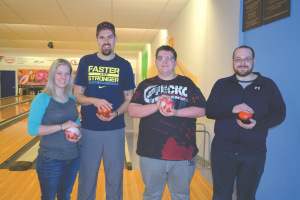 Smoky Lanes Bowling was busy on Feb. 20, as eight teams of four participated in the Winter Blues Tournament.
“It turned out good for a one-day event,” says manager Diane Dentinger.
The cost was $50 per person and the teams were divided into the ‘A”, ‘B’ and ‘C’ events. The first place winners in each event received prizes.
The ‘A’ Event winners were the Pin Killers team, consisting of Henri Aubin, Linda Aubin, Killer Girard and Denis Dentinger. They won golf passes.
The ‘B’ Event winners were the Belladonnas team, consisting of Helene Hausler, Lil Trudeau, Marie Gagnon and Suzanne Skubleny. The won $20 each.
The ‘C’ Event winners were the Money’s Worth team, consisting of Ryan Roy, Kelly Roy, Ryan Hoff and Jared Horvath. They won bowling certificates.
Next tournament
Smoky Lanes Bowling will host the Bunny Hop Tournament on April 3.
It’s a fundraiser for the bowling alley and Dentinger is challenging businesses to participate. For more information, call (780) 323-4244.