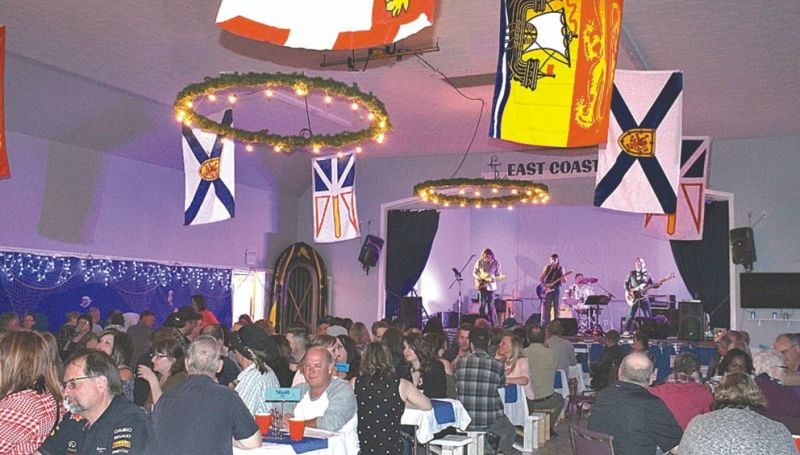 There are a great many honorary Newfoundlanders in the Smoky River region since “East Coast Night,” at McLennan Elks Hall, and many of the honourees got their first kiss at the April 28 event.

Well, it may not have been their first kiss but it was the first time they kissed a cod while undergoing the “screech in,” a unique initiation ceremony when someone “from away,” becomes a titular Newfie.

It is impossible to tell if it was the shot of rum or the allure of kissing a fish, but almost everyone attending the event got in line to be “screeched in.”

Prior to the Newfoundland initiation ceremony, the evening began with everyone enjoying fish and chips supper, prepared by Seppi’s Catering from Hythe Alberta.

Following the screech in, Edmonton based “Amie Weymes and the Atta Boys” an energetic danceable party band that can move seamlessly between genres from rock, pop, country, and of course Celtic, opened with an interesting, lively rendition of the classic song, “Dirty old Town.”

Along with music and dancing there was also a 50/50 draw and sea food basket raffle, for three seafood baskets valued at $500, $300 and $200 and purchased from Grand Banks Seafood in Grande Prairie.

Flags representing all four Canadian Maritime provinces hung from the ceiling with nets and other décor evocative of the Maritimes and maritime culture decorated the walls with the tables named for cities and towns in the four Atlantic Provinces.

The McLennan Recreation Board also puts on the Kicks for Kids program and Children’s Pond Hockey to ensure that affordable programs are available to children and youth in the community.

The recent upgrade to the interior of the H.W. Fish Arena was made possible through a grant received by the Rec Board and the society has three grant applications submitted to support building a new Outdoor Multi-Sports Facility.

For those who had a little too much wine, beer or Screech, Victory Life Church provided a Keys Please Service, which works by one volunteer driving people home in their car followed by another Keys Please volunteer to pick up the driver and take them back.

The Keys Please Service is free but tips were welcome with the funds raised going towards works in the community.