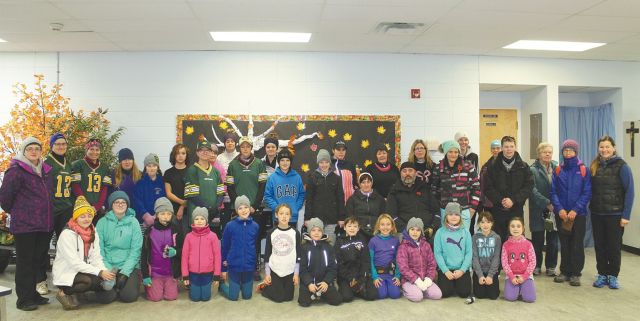 Athletes from Edmonton, Sherwood Park and Grande Prairie along with some from the surrounding communities of High Prairie, Peace River, Grimshaw and the immediate area, participated in the first annual “Run to Remember,” an event held on November 12 to coincide with the Remembrance Day weekend.

The event had participants of all ages with seven-year-old Callie Giroux who ran 2.5k in 27.53 minutes being the youngest runner and seventy-seven year old Mary Pardell who ran the 2.5k in 30.07 minutes being the oldest.

“The results had some cool outcomes too, with members of Smoky River Runners, sister and brother, eleven-year-old Anyka and eight-year-old Preston Desaulniers finishing ahead of everyone including adults, in a tie for fastest time in the 2.5k at 15.07 minutes,” says Smoky River Runners coach and event organizer Michelle Phillips.

Eight-year-old Wyatt Hunting was the only Smoky River Runner team member to run the 5k trail, finishing with the fourth fastest time of 27.25 minutes.

Eleven year old Simon Garant was the only other under 18 runner in the 5k, finishing with the seventh fastest time at 29.30 minutes.

Considering the event was in honour of veterans, it was fitting that veteran Tyler Ellsworth who served in Afghanistan came out to participate in the run. Ellsworth also represented the Canadian Armed Forces, laying its wreath at the Remembrance Day Ceremony.

The route followed by the runners passed by Manoir du Lac and residents placed poppies on the windows and displayed a poster supporting the Run to Remember. Some residents also watched the run.

“This was truly a multi-generational community event that brought our region together while respecting and honouring those who have served,” says Phillips.