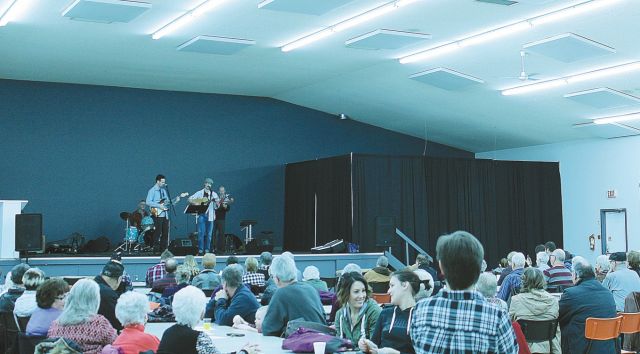 This is the first year the event was held at the Centre Chevaliers with the hall sponsored by Francois and Monique Côté.

The event featured live music, food, a silent auction; donations were accepted at the door and Fundscrip gift cards, which can be purchased at any time.

The first group of musicians to perform comprised of Joel Lavoie, his father Rénald, brother Jean-Pierre and Laval Bergeron. The second musical set was performed by Trin Potratz and Ariane Côté.

Homemade cookies and butter tarts made by board members were served with tea, coffee and juice.

Annual memberships were also for sale, $40 for a single $60.00 for couples, giving members access to the society’s library and on-line sites to assist with their research.

The society also has First Nations and Métis History with indexed photographs and negatives, and photos of many communities in Northern Alberta.

Located in the Village of Donnelly, the society is a research centre for genealogy and local history.

The mandate of the Society is the preservation and conservation of the French culture in the region. With the changing demographics there may be some discussion in the future about serving newcomers also.

“We are very pleased with the support from our communities and individuals who came for an afternoon of music,” says event organizer Lucille Bussière.