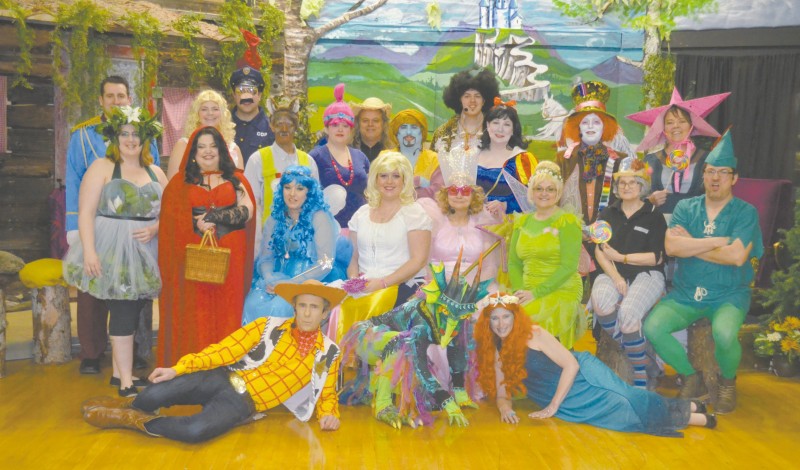 From bingo to fireworks McLennan Family Day celebration was about family, community and having fun

The 2017 McLennan Family Day was organized using the proverb “the best times are always found with friends and family gathered round,” and so it was on February 19 when families and others in the local community came out to participate in the Family Day events.

The Elks Hall opened at approximately 2pm and prize bingo, eagerly played by both adults and kids took place between 3pm and 4.30pm with numerous prizes donated by local businesses

Hot chocolate, coffee, juice and popcorn were available throughout the afternoon and hotdogs were served from 4.30pm to 6pm.

A welcomed addition to the line up of events was the sleigh rides that took place from 5pm to 7pm, taking the picturesque route along the lakeshore to the site of the bonfire and back to the pickup spot on Lakeview Avenue, just below Centre Street.

The weather was just cold enough to be seasonal and with some fresh snow, conditions were perfect for the sleigh rides.

The kids also brought their tubes and sleds, playing on the hill above the site of the bonfire.

The 35th annual Carnaval de St. Isidore from February 17 to the 19th had a “Red Carpet” theme with the community centre auditorium adorned in appropriate images of celebrities and some well know personalities from the local community.

Since 1982, when the first Carnaval de St-Isadora was organized, the event has gained the reputation as the consummate winter event celebrating the Franco-Albertan culture.

The winter carnaval provides an opportunity for people from all cultural backgrounds to be Francophiles for three days, while having fun, enjoying the food, music and traditional customs of the Francophone-Albertan culture.

LAHF Troupe embraces ‘Once Upon a Time’ for its annual production

That was what guests of LAHF Troupe’s production, entitled ‘Once Upon a Time’, had to answer as they voted for the “murderer(s)” at the end.

The Local Actors Having Fun Troupe held their annual production at the Jean Cote community hall for two performances, the first on February 25 and the second on March 4.

It was their eleventh annual production and director Lise Poirier is pleased with the cast and crew for their efforts.

“It’s a team effort,” says Poirier. “For me, it’s gratifying to see the result. I’m very honoured to be here. It’s a great group.”

The ‘Once Upon a Time’ theme featured characters from various fairy tales such as ‘Alice in Wonderland’, ‘Sleeping Beauty’, ‘Snow White’ and ‘Little Red Riding Hood’. These characters became part of the mystery dinner theatre that LAHF Troupe is known for.

During the RVF, the French Canadian Association of Alberta (ACFA) supports the approximately 25 regions in the province with Franco-Albertan communities in arranging activities celebrating their local Francophone culture.

French and French immersion schools across the province also participate in RVF.

At the École Héritage event, students, teachers and parents assembled in the gym, sang together before the residents of each local community taking their place under the Franco-Albertan and Canadian flags, when the name of that community was called.

The flag raising ceremony is an important event that celebrates the Franco-Albertan identity, its resilience as a minority community and its strong cultural affiliation with this province.

The Franco-Albertan flag, designed by Jean-Pierre Grenier was adopted by the ACFA in 1982.

The flag is blue, white and red, with a white fleur-de-lys in the upper left corner signifying the Francophone community and a red wild rose in the lower right corner representing the province of Alberta.

Twilight Figure Skating, Carneval 2017 travelled ‘All around the world’

Approximately 200 people attended the event to enjoy seeing the skaters demonstrate their skill and finesse on the ice.

It was also a successful fundraiser for the Twilight club to which 32 local businesses donated money and prizes.

“Everyone is always so generous with their donations and purchases of raffle tickets,” says club president, Louise Reid.

The Carneval got underway with Janelle Beaudoin carrying the Canadian flag and skating to O Canada.

This year’s theme, “All Around the World,” saw 24 members of the club do routines representative of different countries including Italy, Ireland, Russia, Ukraine, India and China.

The US was represented with pieces with Broadway, Las Vegas and Hawaiian themes.

The rink was decorated in an interesting minimalist manner with white and blue balloons, a painted map of the world and flags from various countries being celebrated.

The fun, energetic C-A-N-A-D-A piece was performed by the preSkate group.

Peace River, Alberta – On March 3rd, 2017 the Peace Regional RCMP with the assistance of the Emergency Response Team executed two search warrants at a residence on 82nd Avenue and 94th Street in the town of Peace River.

Seven occupants from within the residence were taken into police custody, no one else was involved in the incident.

(An) adult male victim was restrained, burned and beaten over hours. The injured male was discovered during the high risk execution by the Emergency Response Team.

Four of the adults originally taken into custody are facing further charges in relation to the forcible confinement and aggravated assault investigation.

All four remain in custody and a bail hearing was scheduled for Monday, March 20, 2017.