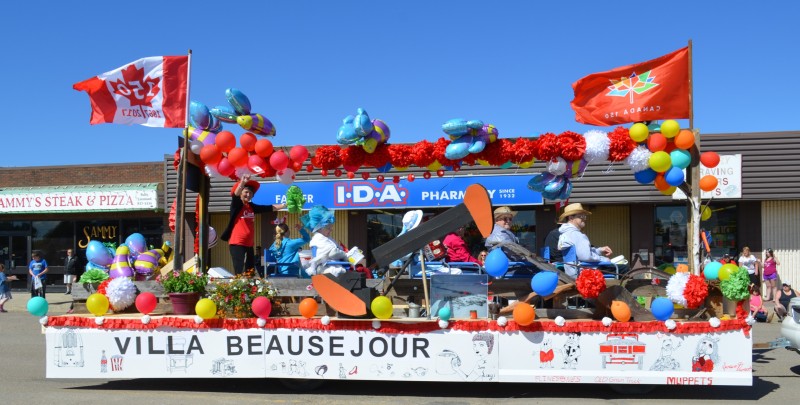 Skipping right along, students at Ecole Routhier raise $12,027 for the Heart & Stroke Foundation of Alberta

The playground at Ecole Routhier was a busy place on May 26, as the students and their teachers got plenty of exercise.

Following the monthly assembly in the main gym, they went outside for skipping activities.

“It’s fun and a great way to raise money for a worthy cause,” says organizer Marie Gagnon.

Their skipping activities were part of the school’s annual Jump Rope for Heart activity. Jenna Delaney, who works for the Heart & Stroke Foundation of Alberta, was there May 11.

She highlighted the importance of exercise and explained the fundraising they would do over the next two weeks.

As a result, several teachers will get their hair dyed red.

The class that raised the highest percentage of funds will get a free swim in June.

Many people elect to become motivational speakers, pontificating about the road to material success, offering techniques to reach one’s goals with little reference to the realities and challenges that many people confront.

Henry L. Williams, known throughout his professional football career in the US and Canada as Gizmo Williams has worked as a motivational speaker since his retirement from football in 2000.

Unlike many motivational speakers, Williams’ frame of reference is rooted in his own experience and if anyone is qualified to expound on triumphing over tragedy and adversity it is Williams.

Born in 1962 into abject poverty in Memphis, Tennessee, Williams lost both his parents at a young age; his mother died of multiple sclerosis Christmas 1969 when Henry was six and his father died in a house fire the following Christmas.

Williams has a family history of multiple sclerosis that along with taking his mother, the disease also claimed seven of his siblings.

On May 30, Henry L. “Gizmo” Williams came to the region to speak to students at G.P. Vanier and Ecole Heritage and later that evening gave a presentation at the Elks Hall in McLennan.

When speaking with the students Williams attributed his success not first to his athletic prowess but to having teachers who cared about him, who challenged him to perform to his best academically as he did naturally on the football field.

Julianna Gosselin and Olivier Roy shared the honour of giving the 2017 graduation speeches.

The ceremony at St. Anne’s Church also included the graduates partaking in the ritualistic lighting of the candles and the placing of toys and other emblems of childhood at the top of the church, representing the road to maturity and putting aside of childish things as the graduates go out in the world.

Following the church celebrations, a banquet was held at Centre Chevaliers during which the following bursaries were awarded.

G.P. Vanier, year-end concert on June 16 was arranged in an intimate setting with the musicians on risers below the stage and the audience seated in a semi-circle close to the performers.

It was a perfect setting to appreciate how well the musicians work together, offering energetic, nuanced performances with the encouragement and leadership of the head of the Vanier music program, Pam Heckbert.

Heckbert acknowledged that this performance, marking the end of the 2016-7017 school years was bittersweet.

When school resumes in the fall, Pam Heckbert takes over the position of Principal of G. P. Vanier and she pointed out, with her new responsibilities she will be unable to give the students the commitment she believes they deserves, so she is passing the baton to someone else to take over the music program.

“I love these kids, I love teaching band and I love directing, but unfortunately because of my new role the kids deserve consistency and they deserve more time and energy than I will be able to give them,” Heckbert said. “So it is with a heavy heart that I give this concert but they will be getting what they deserve so I am excited about that.”

She said it was a hard decision but realized that the most difficult decisions are usually the right ones.

The 25th annual Honey Festival in Falher had something for everyone, from the parade on Main Street to children’s activities in the Honey Capital Park, to singing in the Falher Curling Rink.

The event was held June 16-18, kicking off with entertainment in the curling rink on the 16th. SaFire dazzled with her hula-hooping skills, which included getting the audience to participate with her.

Emma Moore also performed, as did Shelly Dubois and her band. The Falher Regional Pool hosted the midnight swim that night.

The main events were held June 17, including a pancake breakfast at the Falher Regional Recreation Complex, prepared abd served by the Falher councillors and staff.

The second annual walk/run started and ended at the Smoky River Tourism building. Al Singer organized the event and the proceeds will go to the Canadian Mental Health Association.

The parade started and end at the Centre Chevaliers. The RCMP and Smoky River Fire and Rescue led the way down Main Street and made a circular route that took them by the Villa Beausejour.

Main Street was also the scene for the Show N Shine, with classic collectors vehicles and some modern high-performance cars to boot.

Several tents were set up on the street by the town office, where the Honey Pot Vendors Market and an artwork exhibition were held.

The Honey Capital Park was the scene of children’s activities in the afternoon.

Face painting, arts and crafts, a soccer clinic and the ‘Can You Beat a First Responder?’ obstacle course were among the activities there.

Entertainment was held in the Falher Curling Rink as well. The performers included Renelle Simard, Trin Potratz and Ariane Cote, the dancing duo of Gerald and Robin Cote, and the Sweet Clover Honey Band. Guests also enjoyed a steak dinner that evening, and C.Alice was the featured entertainment.