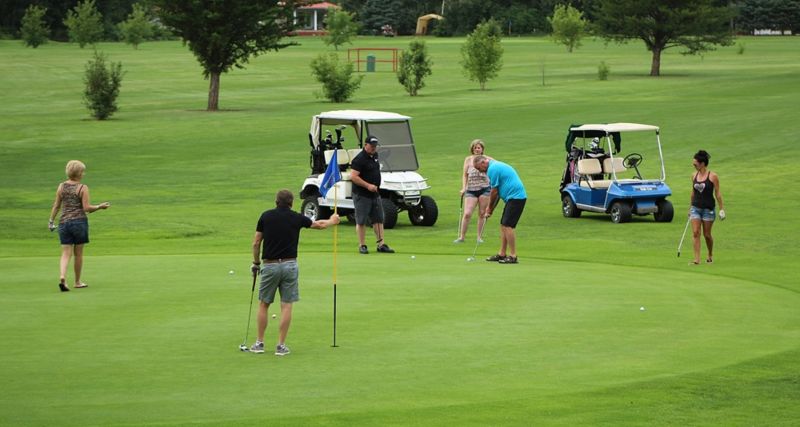 5 Star Golf Course held its couples tournament on Saturday July 22. The golf course is a challenging par 32, 9-hole course situated in the river valley alongside the Little Smoky River 12 km west of Highway 49 on Township Rd 760.

Thirty-two couples participated in the tournament that took place in ideal weather, sunny but not too warm. The general atmosphere on the course was competitive but fun with young couples to seniors sharing participating.

Following the tournament, which ran from 1pm to approximately 6pm, the couples enjoyed supper at the clubhouse before the winners of the tournament were announced.

With elections in October, first-time candidates should consider the realities of serving on council

Municipal Election Day is Monday, October 16th, 2017 and those considering running for council for the first time should be aware of the deadlines and processes in putting their name forward and of the commitments involved in being a councillor.

The nomination day is Monday September 18, 2017 from 10am to 12 noon and the returning officer cannot accept nominations before or after this designated time. There is absolutely no discretion on this matter so those planning to run should take note of the date and time.

Every candidate’s nomination must be in proper format and signed by five eligible voters who must be resident in the respective jurisdiction on the date of signing.

A candidate must be at least 18 years old, a Canadian citizen and a resident in the area he or she is running for at least six months.

The Smoky River Ag Society grounds by Donnelly were the scene of a lot of mud flying during the weekend of Aug. 5-6.

Mud boggers came from all over for the annual Smoky River Mud Bogs, with over 40 participants registered.

“We had over 100 races each day,” says organizer Charlier Deslauriers. “The event wouldn’t be possible without the mud boggers and we look forward to seeing them again next year.”

Having run a business and been involved in children’s education, Lynn Florence is taking these qualifications and applying them to her new role as the director of Smoky River Family and Community Support Services.

“I love people and organizing (activities and events),” says Florence. “I’ve always been intrigued with this program and thought it was a good fit.”

Florence took over the position from Georgia Iliou on Aug. 8. Iliou has transferred to the FCSS office in Clairmont.

Florence has a certificate in early childhood development and she ran Fern’s Greenhouse for 12 years, although her involvement with that business went back as far as 30 years. She also worked at Smoky Lanes Bowling in Girouxville for several years.

Florence was born and raised in the Smoky River region, as were her children. She has a passion for program development and overseeing them. She looks forward to working with Jean Moore-Lemoine and Crystal Marschner, the community development coordinator and youth programming coordinator respectively.

Minister of Seniors and Housing visits the Villa Beausejour

Residents and staff at the Villa Beausejour in Falher had an unexpected visitor on Aug. 22. Lori Sigurdson, the Minister of Seniors and Housing, and the NDP MLA for Edmonton-Riverview, dropped in for a chat.

“I enjoy going across the province and hearing from seniors,” says Sigurdson. She made a speech in the dining area and then sat down and talked to some residents.

Sigurdson also praised the staff and volunteers for the work they do with residents.

Later, she went outside, where resident Isabelle Doran showed her the community garden, with vegetables being grown by other residents. The mayors for Donnelly, Falher and Girouxville were there as well, as was Councillor Raoul Johnson, for the M.D. of Smoky River No. 130.

The minister’s stop in Falher was part of her tour of the Peace Country. Later, she was to present several Minister’s Service Awards in Grimshaw.