At the entrance to the main gym, the flag bearers, wreath holders and guests walked passed strings of paper poppies hanging from the ceiling.

As they made their way into the gym, teachers and students stood in silence. The guests made their way to the edge of the stage to place the wreaths there, as well as the Canadian and Alberta flags in their holders.

The guests saluted the wreaths and flags, and/or reflected on the moment.

Then everyone sang ‘O Canada’ in English and French.

These were the opening moments of the Remembrance Day service at Ecole Routhier on November 9.

The guests included Darryl Duffy of the Royal Canadian Legion, Fire Chief Marcel Maure and several firefighters, as well as three members of the RCMP.

Two students, Tasheila Boyer and Janelle Lanctot, were the masters of ceremony.

Vice-Principal Melissa Portelance welcomed the guests and highlighted those who’ve served and died. This includes Ray Cunningham, who served in the Canadian Armed Forces. Cunningham passed away earlier this year and he was a guest at the school’s Remembrance Day services for many years.

‘The Last Post’ was played from a multimedia presentation, followed by two minutes of silence, and then ‘Reveille’. Two classes, Elise Turcotte’s Grade 4 French class and Laura Wuth’s Grade 6 English class, read ‘In Flanders Fields.’ Check the Smoky River Express’ YouTube Channel for a video of their reading.

As suggested by Darryl Duffy, Jenny St. Jean read a passage from the Canadian Scouts about learning all you can about your country and appreciating what it offers.

Then Melinda Brickwood-Dubois’ music options class sang ‘Never Let Go’ by Brian Adams. The song was also part of the multimedia presentation. There was also a photo montage of Canadian soldiers serving overseas.

The service ended with the flag bearers leading the guests out of the gym. 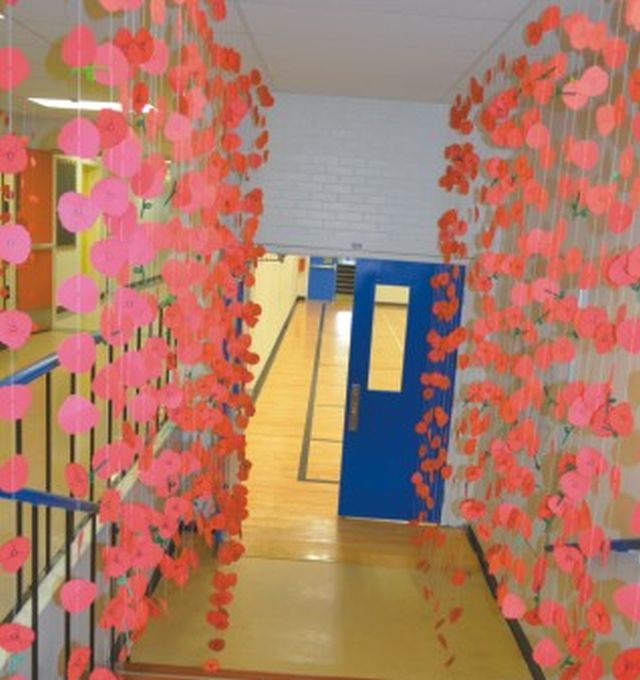