This year’s Remembrance Day will mark the 100 anniversary of the end of the First World War.

Here in Canada it is also a national occasion to remember what has been called “Canada’s Hundred Days,” refering to Canadian and Newfoundland soldiers’ involvement in a string of successful military offensives, from August 8 1918 to November 11, 1918.

Following many other accomplishment, during that 3 month period beginning with the Battle of Amiens, the Canadians then moved north to Arras, penetrating the Drocourt-Quéant Line on September 2, the Hindenburg Line with the capture of Bourlon Wood on September 27, and then to Cambrai, Mount Houy, Valenciennes and into Mons, Belgium in late October and early November 1918.

This performance in the days leading up to the end of the war, earned thirty Canadians and Newfoundlanders the highest decoration for valour, the Victoria Cross.

Only 21 years would pass until the advent of the Second World War on September 1, 1939.

Once again, Canadian troops went to the battlefields of Europe to make the same sacrifices other Canadians had made just less than a generation earlier.

On Remembrance Day, society acknowledges the debt of gratitude it owes to veterans.

However, to ensure that veterans’ sacrifices are not in vain we should emulate them, do as they did and relinquish all self-interest. 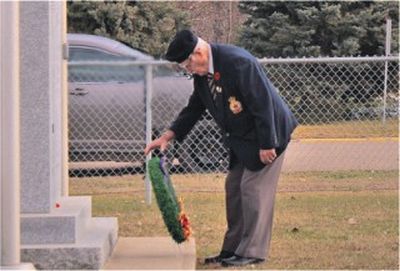