Home Sports Pirates win first round of playoffs against the Comets 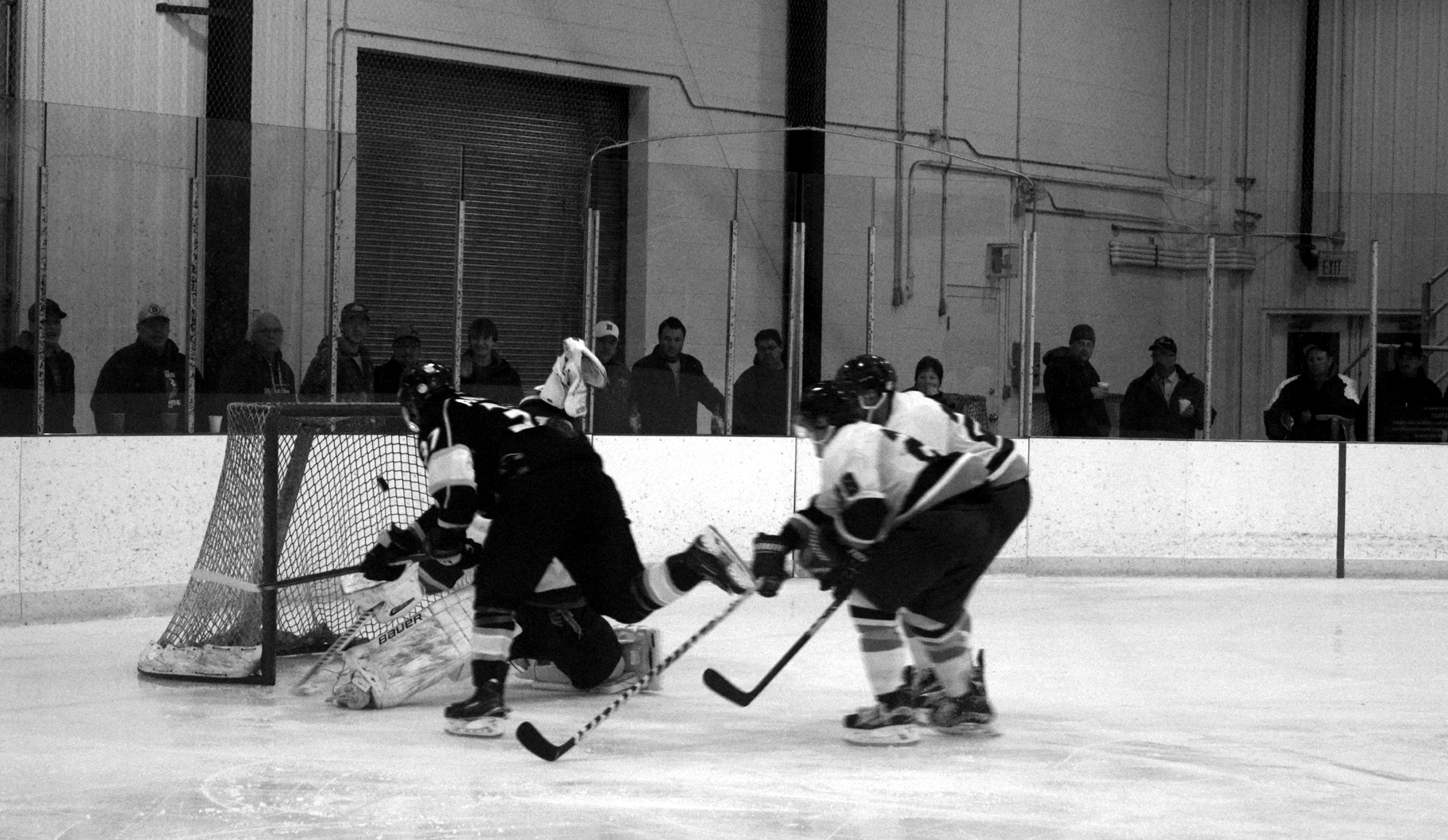 Craig Anderson of the Falher Pirates scores the tie-breaking goal in double overtime against the Manning Comets on Feb. 6. Below, the two teams shake hands at the end of the game. The Pirates win the best-of-five series as a result and advance to the next round of playoffs against the Spirit River Rangers.

It was a tight battle between the Falher Pirates and the Manning Comets, but the home team managed to come out on top in double overtime to win 4-3.
The Pirates hosted the Comets on Feb. 6 for the third game of their best-of-five series. The Pirates had to come from behind to win and coach Shawn Gervais is pleased with the result.
“It’s a sigh of relief,” says Gervais. “It was a good game right from the beginning. (The Comets) came out and they didn’t want to lose the series to night. They put everything they had into it. Fortunately, we came up with the lucky bounce at the end to win the game.”
The Comets opened the scoring at 3:18 in the first period. Cole Somerville scored a power play goal, with Jeremie Perron and Dave Lawrence receiving the assists.
However, the Pirates came back in short order. Craig Anderson scored the first of his goals at 11:52, putting the puck in on the doorstep. Morgan Maclean and Jay Anderson collected the assists.
Less than a minute later, Dallas Brochu scored the team’s second goal, and Joel Pelletier and Neil Maisonneuve received the assists.
The first period ended 2-1 in favour of the Pirates.
However, the Comets dominated play in the second period. Coty Thomas scored the equalizer at 6:37. Lawrence and Somerville received their second assists of the game.
Then Lawrence scored the go-ahead goal at 16:29, on a power play opportunity. Perron received his third assist and Michael Gillen received one as well.
The second period ended 3-2 in favour of the Comets.
Down, but not out, the Pirates got their mojo back in the third period.
Hugo Dessegna scored the equalizer at 2:24, with the help of Pat Rowan and Jason Bouchard.
Both teams sought the edge as the period went on, But there were no more goals scored, forcing overtime.
Twice, the Pirates were denied a goal during the period, as the officials ruled them invalid. So, the game continued into double overtime.
The Pirates made the breakthrough at 4:31, when Craig Anderson scored his second goal, flicking it over the shoulder of Comets netminder Braden Gamgle and into the net.
The Pirates won the game by a score of 4-3 in double overtime, winning their best-of-five series in three games.
Shots on net for the game were 66-59 in favour of the Pirates.
As this story was going to press, the Pirates were preparing for their next series against the Spirit River Rangers.