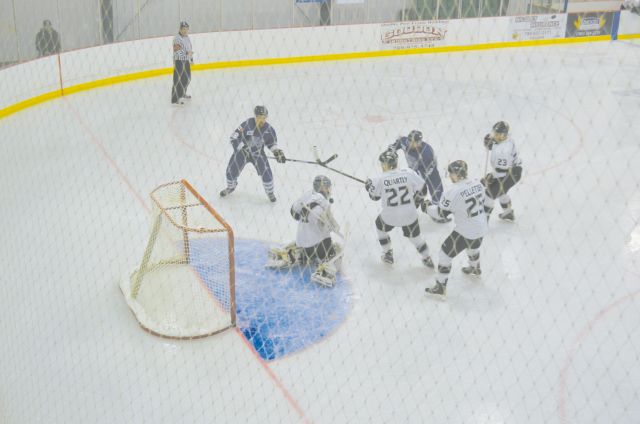 Mac Olsen
Express Staff
@SmokyRiverExprs
The Falher Pirates split a pair of games in the last couple of weeks, winning against the Fort St. John Flyers at home on Nov. 26, but they lost on the road against the Grimshaw Huskies on Dec. 1.

Coach Mathieu Maisonneuve was pleased with the team’s performance during the Flyers’ game.

“We have to play hard-nosed hockey and get the puck out of our zone,” says Maisonneuve.
“We had some of our key players step up and work hard. That was backed up by some great goaltending.”

Jordan Panasiuk was in net for the Pirates that night.

Neil Maisonneuve opened the scoring for the Pirates at 11:28 in the first period, with a power play goal. He fired the puck high into the net, and Taylor Cote and Joel Pelletier received the assists.

It was 1-0 for the Pirates at the end of the first period.

Denis Rochon scored the Pirates’ second power play goal at 50 seconds into the second period. Dan Aubin received an assist while Pelletier collected his second of the game.

Then the Flyers came on strong with three goals. Jeff Shipton scored two goals, including one on the power play. Rick Cleaver scored the other power play goal.

The Flyers were ahead 3-2 at the end of the second period.

But Dave Lawrence gave the Pirates the equalizer at 55 seconds in the third period. Jeff Chalifoux and Josh Rutherford received the assists.

Jason Bouchard scored the team’s fourth and final goal at 15:52, with Pat Rowan and Rochon collecting the assists. Check the Express’ Facebook page for a video clip of the goal.

In the last two minutes of play, the Flyers pulled their goalie and put an extra attacker on the ice. The Flyers had several opportunities to tie the game, but the Pirates held on to win 4-3.

Shots on goal for the game were 33-28 in favour of the Flyers.

The Pirates travelled to Grimshaw in the evening of Dec. 1 to play against their rivals, the Huskies.

But things didn’t go well for the Pirates, as the Huskies won the game by a score of 8-6.

Shots on net for the game were 40-28 in favour of the Huskies.

The Pirates’ next road game was on Dec. 2, when they travelled to Fort St. John to face the Flyers again.

Their next home game is on Dec. 10, when they host the Spirit River Rangers.