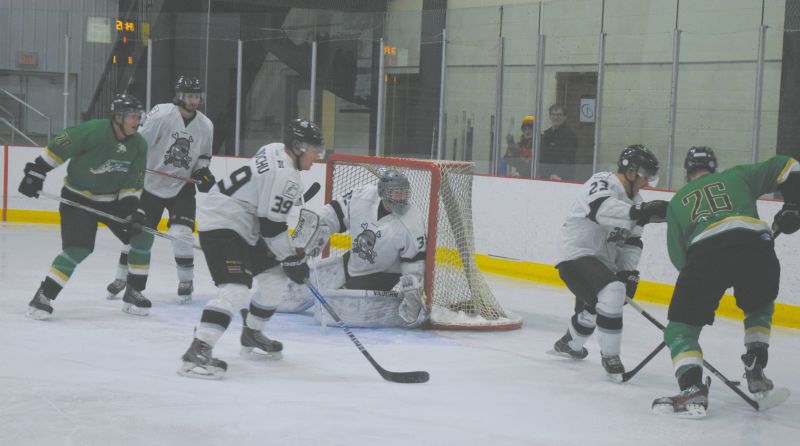 It was a big win for the Falher Pirates, with the end of the regular season nearing, as they came out ahead of the Grande Prairie Athletics.

The Pirates hosted the Athletics in the evening of Jan. 5 and won by a score of 10-5.

“We capitalized on our power play tonight,” says Coach Taylor Cote. “We took advantage of our offensive opportunities and we had some solid goaltending.”

Blake Clement opened the scoring for the Athletics at 3:48 in the first period, slipping the puck into the net on the power play. Mark Stojan and Tanner Labbe received the assists.

But Dakota Mason evened the score for the Pirates less than 15 seconds later, with Nathan Smith receiving the assist.

At 9:25: Craig Anderson scored a power play goal for the Pirates, with Nathan Smith and Joel Pelletier receiving the assists.

Then, at 17:49, the first game misconducts were handed out. Mark Stojan of the Athletics received a two-minute penalty for elbowing, a 10-minute misconduct and a game misconduct. He was sent to the dressing as a result.

Then, with less than 30 seconds remaining, Pirates netminder Jordan Panasiuk traded off with Talon Walton for the rest of the game.

Seconds later, Devon Quartly flicked the puck high into the net for the Pirates, with Pat Rowan and Nathan Smith collecting the assists.

The Pirates were ahead by a score of 3-1 at the end of the first period.

During the second period, the Athletics tried time and again to rally with their speed and strong forechecking. However, the Pirates thwarted them at every turn, and delivered one goal after another against their net.

Quartly scored his second goal of the game at 6:55, with Smith and Anderson collecting the assists.

Check the Express’ Facebook page for a video of the goal.

Mason followed up with his second goal of the game at 8:41, firing the puck into the net. Cedric Harvey and Jeff Chalifoux received the assists.

Then, at 12:48, Koltin Caron fired the puck into the attic, rewarding the Pirates with a shorthand goal. Dallas Brochu shared the moment with him.

Mason collected his third goal of the night just five minutes later, firing the puck into the net. Rollie Gladue received the assist.

Smith gave the Pirates their eighth goal of the game at 18:42, slipping the puck into the net on the approach. Mazurek received the assist.

At this point, Athletics goaltender Chris Levesque switched off with Darren Walker for the rest of the game.

The Pirates were ahead 8-1 at the end of the second period.

However, the Athletics managed to rally in the third period, although it wasn’t enough to bring them victory.

Mackenzie Caron put the puck in the net from the side at 2:05, with Karey Pieper and Tanner Labbe receiving the assists.

Then the second major penalties of the game were handed out at 3:43.

Pelletier of the Pirates and Pieper of the Athletics got into a fight. Each receive a penalty for fighting and a game misconduct.

The Athletics collected their third goal of the game at 6:35. Lyndon Lewis fired the puck, which hit the goalie and bounced into the net. Ryan Trudeau and Mackenzie Caron collected the assists.

Andrew Buote gave the Athletics their fourth goal at 8:03, with Caron collecting another assist and Labbe receiving one as well.

But Dakota Mason extended the lead for Pirates at 9:28. Mason fired the puck at the net, which hit the post and bounced in. Chalifoux collected another assist, as did Harvey.

However, the Athletics had the last word. At 19:32, Buote scored his second goal of the game by putting the puck in the basement. Caron received another assist, as did Lewis.

The Pirates weren’t as successful in their next game however. They travelled to Grimshaw on Jan. 6 to play against the Huskies.

The Huskies won that game by a score of 8-4.

Remaining games of the regular season

The Pirates travelled to High Prairie on Jan. 16 to play against the Regals.