Home Sports Pirates lose to the Comets in overtime, but shut out the Regals 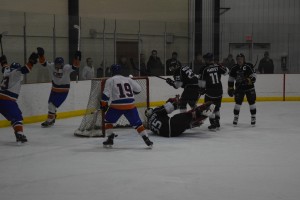 It didn’t go the Pirates’ way on Jan. 2, as they lost to the Comets 4-3 in overtime. Above, Matt Boyd scores the winning goal for the Comets, with the assists going to Josh Rutherford and Chevan Wilson.

The new year didn’t begin well for the Falher Pirates, as they lost 4-3 to the Manning Comets in overtime, at home on Jan. 2.
“They got one lucky bounce at the end,” says coach Shawn Gervais. “That’s the way the game goes.”
Nonetheless, he said it was a good game overall.
The Comets dominated play in the first period. Reggie Kirkpatrick scored a power play goal at 4:07, with Michael Gillen receving the assist.
Less than two minutes later, Josh Rutherford scored the team’s second goal, with the help of Chevan Wilson and Joel Henitiuk.
But the Pirates turned the tables on the Comets in the second period.
Their first opportunity came after the Comets received a penalty. Jeremie Perron of the Comets bashed Brock Clement of the Pirates against the boards at 14:39. Clement laid on the ice for several moments, but he was able to get up and return to his bench without help.
Perron received a two-minute penalty for checking from behind and a game misconduct. Check the Express’ Facebook page for a video clip of the incident.
The Pirates also suffered a penalty at this time. But Dallas Brochu scored a goal during four-on-four play at 16:11. Neil Maisonneuve was credited with the assist. Check the Express’ Facebook page for a video clip of the goal as well.
Less than a minute later, Dan Aubin scored a shorthanded goal for the Pirates, to even the score at 2-2. Sam Roy and Cedric Harvey received the assists.
The battle was on in the third period.
Sam Roy of the Pirates went to the box at 11:54, for two minutes for boarding.
This allowed the Comets to edge ahead once again. Matt Boyd scored the team’s third goal on the power play at 13:51. Rutherford and Henitiuk received the assists.
However, the Pirates evened the score again at 15:09. Pat Rowan put the puck in the basement with the help of Jeff Chalifoux and Jay Bouchard.
Play stopped at 17:54, as Ben De Merchant of the Comets went down in his team’s end. But he was able to get up and returned to his dressing room for the duration of the period.
The third period ended in a 3-3 tie, forcing a five-minute overtime period.
However, the Pirates’ hopes for a win for the first game of the year were dashed when Matt Boyd scored the Comets’ fourth and final goal at 3:41. Rutherford and Wilson received the assists.
Shots on goal for the game were 45-36 in favour of the Pirates.
Shutting out
the Regals
The Pirates hosted the High Prairie Regals on Jan. 5, and they blanked them 3-0.
Craig Anderson scored in the first period. Sam Roy scored on the power play in the second period (check the Express Facebook page for a video clip of the goal). Morgan Maclean scored in the third period. Netminder Dave Gingera earned a shutout as a result. 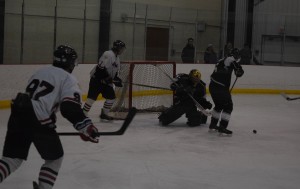 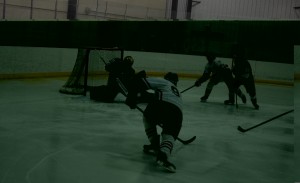 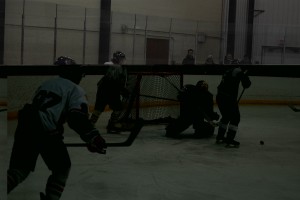 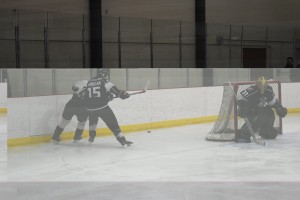 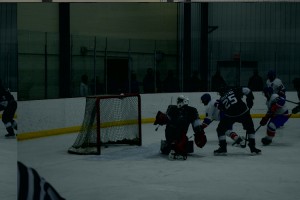 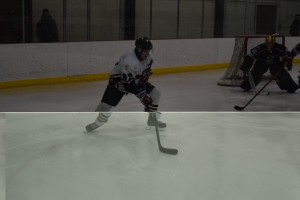 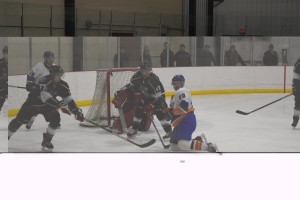 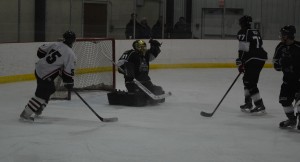