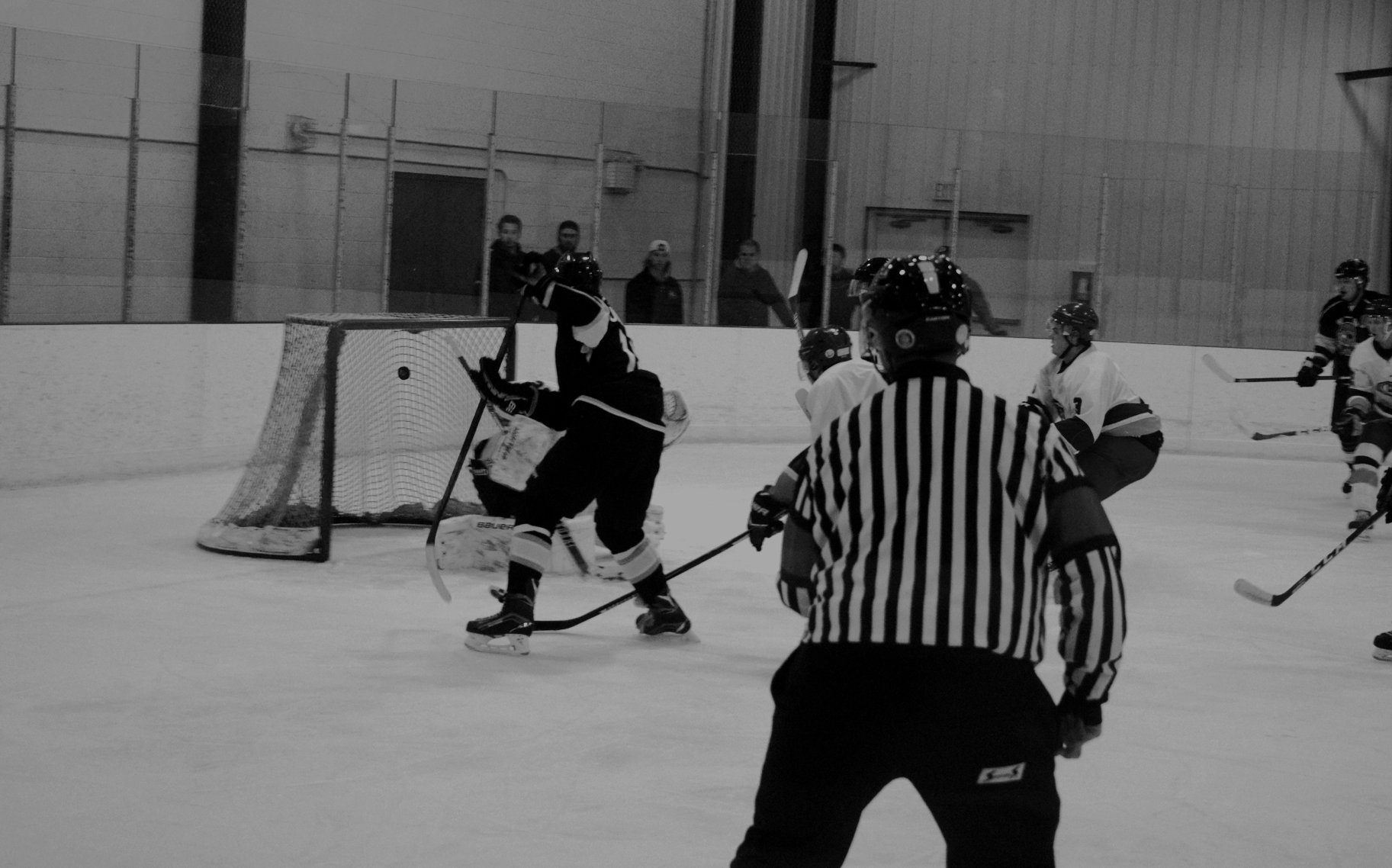 Morgan Maclean scores for the Falher Pirates late in the second period, with Craig Anderson and Drake Cunningham collecting the assists. The Pirates hosted the Manning Comets on Feb. 2.

The NPHL playoffs are in full swing and the Falher Pirates are taking on the Manning Comets in a best-of-five series.
The Pirates hosted the Comets in their first game on Feb. 2 and they came out with a 7-4 victory after a tough battle, pleasing coach Shawn Gervais.
“Our guys dug deep and came up with the win,” says Gervais. “They’re starting to buy in and everybody’s going. There’s a lot of hits and everybody’s playing hard.”
It should be a good, intense series, he adds.
The Comets opened the scoring just a minute into first period. Dave Lawrence put the puck in the net off a pass by Coty Thomas.
Then at 16:55, Pat Rowan got the Pirates on the board when he put the puck in the net from the doorstep. Morgan Maclean and Hugo Dessegna received the assists.
It was 1-1 at the end of the first period.
The Pirates dominated the second period with five goals.
Jason Bouchard scored at 1:45, with Maclean and Jeff Chalifoux collecting the assists. Look for a video clip of the goal on the Smoky River Express’ Facebook page.
Maclean scored twice during the second period. Rowan also scored twice, including an unassisted goal.
The assists for these goals went to Chalifoux (one), Bouchard (one), Cedric Harvey (one), Drake Cunningham (one) and Craig Anderson (two).
However, the Comets had the last word, making the end of the period 6-2, as Josh Rutherford scored with just over a minute remaining. Bo Asmussen and Chevan Wilson received the assists.
The Comets had momentum going into the third period. Matt Boyd scored on the approach at 7:44. Wilson received his second assist Rutherford received one as well.
Then the Comets moved to within two at 14:23, when Joel Henitiuk fired the puck into the net on the approach.
With just over a minute to play, the Comets pulled their goalie and put an extra attacker on this ice. However, Harvey was able to score on an empty at 19:23, to give the Pirates their seventh and final goal.
The Pirates won the game by a score of 7-4. Shots on goal for the game were 38-32 in favour of the Comets.
Game two
The Pirates travelled to Manning on Feb. 4 for their next game. The Pirates won the game by a score of 4-1.
The Pirates’ next home game was on Feb. 6. Watch for a story in the Feb. 17 edition of the Express.