Home Sports SPORTS – Pirates are out of the playoffs, as the Rangers defeat them four-straight 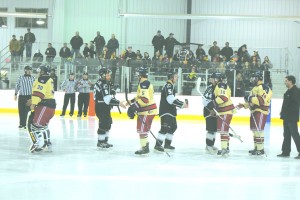 The Pirates and Rangers shake hands at the end of the fourth game on Feb. 20. The Rangers won the best-of-seven series in four straight games and advance to the next round of playoffs.

The Falher Pirates are hanging up their skates for the season and the Spirit River Rangers are moving on to the next round in the NPHL playoffs.
“We lost against a really good team,” says coach Shawn Gervais.
“Spirit River is a great hockey team. But there’s nothing to take from our guys.
“We had every opportunity. We battled hard and took them down to the wire here, in game four. I can’t ask anything more from our hockey club. It was a good year overall, but it’s sad to see it come to an end.”
Games three and four
The Pirates travelled to Spirit River on Feb. 18 and lost to the Rangers by a score of 5-2.
Next, the Pirates hosted the Rangers on Feb. 20 and it appeared the home team could keep their playoff prospects alive.
Jay Anderson scored a power play goal for the Pirates at 15:09 in the first period. Craig Anderson and Tanner Labbe received the assists.
The Pirates evened the score at 10:24 in the second period. Alex Curran scored with assistance by Colin Lefley.
But just two minutes later, Jay Bouchard put the Pirates ahead again, with help from Craig Anderson Jay Anderson.
Down by a score of 2-1, but not out, the Rangers came on strong in the third period. Curran scored his second goal of the game at 6:36, with Evan Boire receiving the assist.
Less than 20 seconds later, Jay Anderson put the Pirates ahead again, with his second goal of the game. Labbe received his second assist.
However, the Rangers evened the game again just 10 seconds later, when J.M. Saint-Pierre scored with help from Fred Tanguay and D’lane Sather.
The third period ended 3-3, forcing an overtime period.
Just 17 seconds in overtime, Trevor Mazurek scored the winning goal for the Rangers, courtesy of Chris Kestell.
Shots on goal for the game were 40-31 in favour of the Rangers.
Look for action shots of the fourth game on the Express’ website, at www.smokyriverexpress.com. Also, check the Express’ Facebook page for video clips of previous games this season.