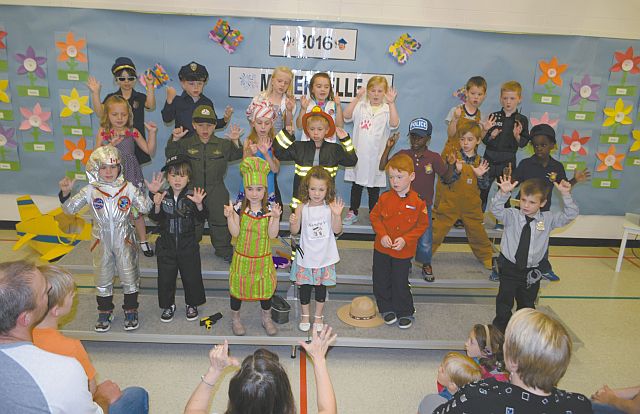 The French Kindergarten class at Ecole Routhier held a graduation ceremony for their students in the small gym on June 16. The students dressed up in the roles that they want to be when they grow up. In the photo above, in front, from left, are Caleb Morin, Taylor Dumont, Callie Giroux, Kendra St. Jean, Nash Lemay and Blake Brulotte. In the middle row, from left, are Madix Maure, Max Therriault, Alanah Dubrule, Keegan Wurban, Daniel Levesque, Grady Blanchette and Nicolas Levesque. In the back row, from left, are Kayleigh Lepage, Teagan Bouchard, Josyanne Aubin, Paisley Marchildon, Marshall Reid and Ian Hicks. Not shown is Liseanne Lepage. The students sang several songs and their teacher, Jenny St. Jean, had some funny and encouraging remarks for each of them. They also told their families what they liked about being in the class. They sang several songs for their families, too. There were several multimedia presentations, including one showing photos of the students’ activities throughout the school year. The English Kindergarten class held their graduation ceremony in the small gym on June 15.