Home Sports One loss, one win for the Falher Pirates in opening of playoffs with the Manning Comets 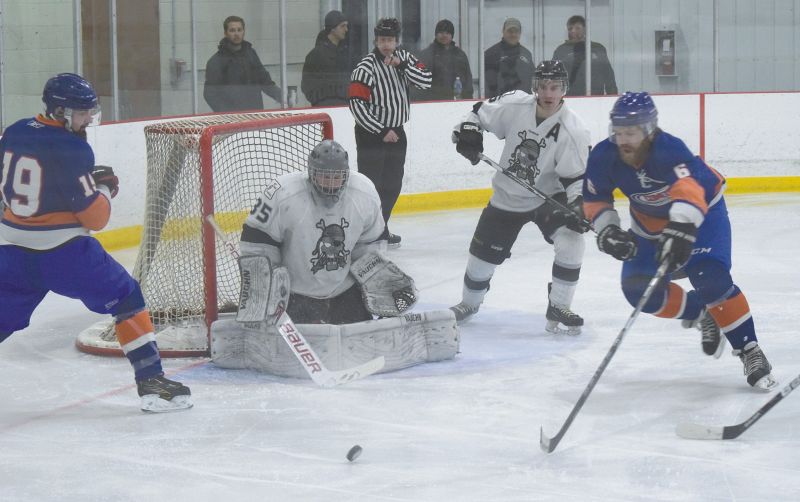 The Falher Pirates are facing a tough playoff series against the Manning Comets and it showed in their first home game on Jan. 30.

The Comets came from behind in the third period to force overtime, then they won the game at 1:08 in that period.

“The Comets’ last goal in the third period, with three seconds left, took away our momentum and we never recovered,” says Dan Brochu, who’s now coaching the team.

Dakota Mason opened the scoring for the Pirates at 1:16 in the first period, with Pat Rowan and Brian Sommers collecting the assists.

The Comets came back at 10:39, when Josh Rutherford put the puck in the basement. Coty Thomas and Brandon received the assists.

The score was 1-1 at the end of the first period.

The Comets dominated the second period with two more goals.

Thomas put the Comets ahead just 23 seconds into the second period, sending the puck into the living room.

Michael Gillen received an assist, while Dillmas collected his second of the game.

Play stopped at 6:28, when Martin Peters of the Comets went down on the ice. Team mates helped him to the dressing room.

Brian Sommers of the Falher Pirates received a five-minute penalty for charging. Thomas Dechant and Cody Lightbody of the Manning Comets received two minutes each for roughing.

At 10:53, Steven Kover scored the Comets’ third goal on the power play, with Gillen and Rutherford collecting the assists.

The score was 3-1 in favour of the Comets at the end of the second period.

Although the Pirates were down, they weren’t out and they made a strong comeback in the third period.

At 7:19, Craig Anderson put the puck in the net during four-on-four action.

Pat Rowan came along at 10:43 and scored the Pirates’ third goal, with Dakota Mason and Dylan Cunningham sharing the spotlight.

Morgan Eaton evened the score for the Pirates at 15:34, putting the puck in the basement. Trevor Mazurek and Jeff Chalifoux received the assists.

Then Craig Anderson put the Pirates in the lead at 17:33, Mazurek and Chalifoux were in on the assists again.

Check the Express’ Facebook page for a video of the goal.

However, Deryk Whitehead of the Comets scored the tying goal at 19:57, with assistance by Steven Kover.

With a 5-5 tie, the game went into overtime.

The overtime was a short-lived event, as Deryk Whitehead of the Comets scored the tie breaker at 1:08. Steven Kover and Bo Assmussen received the assists.

The Pirates travelled to Manning on Feb. 1 for game two and it was a very different story for them.

The Pirates won that game by a score of 8-4.

The Pirates’ next home game was on Feb. 3, then they travelled back to Manning on Feb. 6 for game four.