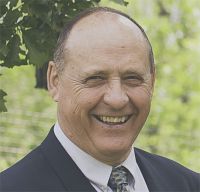 René was born in McLennan, Alberta, to Alberta (Désfosses) and Paul Gagnon on April 28, 1947. Under their guidance he learned many important keys to life: to value people, hard work, and good morals. In addition to this foundation, he believed that anything was possible and he lived life to the fullest unafraid to tackle new challenges.

Upon leaving home, René went to NAIT where he became certified as a Millwright and Heavy Duty mechanic. From there he began working in the oilfield in Devon, Calgary, and Swan Hills. In 1977 he returned to Guy to farm and then began his own business, Gagnon’s Oilfield Services Ltd., and saw no need to ever retire as it brought him great joy. Two years ago, after receiving a cancer diagnosis, he reduced his hours in order to travel and spend more time with his cherished family. Then in October of 2017, René was admitted into hospice care where his wife and family remained at his side.

He was predeceased by his father, Paul Gagnon, and three brothers, Henri, Daniel and Jacques.