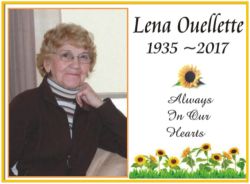 Lena Ouellette (née Cunningham), longtime resident of Girouxville, Alberta, passed away surrounded by her loving family at the Peace River Community Health Centre on July 31, 2017, at 81 years of age. Lena was born in St.Albert, the 8th of 9 children, to Berl and Ella (née Perron) Cunningham.
Lena shared her many talents with friends and family. Many people were given vegetables or canning from her productive garden or had clothes and costumes sewn with her artistic seamstress skills. Lena had a belief there was nothing she could not do, whether it was sewing, or carpentry, drawing, toy repair, or wedding decorations. She was a true “Jack of all trades”. Lena also volunteered her time to the Girouxville cemetery committee and was instrumental in beautifying the grounds. Her greatest treasures were her children, grandchildren and great-grandchildren. She leaves to mourn her husband of 62 years Norbert; children Doris (Louis) Henley of Girouxville, Alberta, Don (Jo-Anne) of Calgary, Alberta, Rob (Denise) of Didsbury, Alberta, Diane (René) Blanchette of Girouxville, Alberta, Reg of Calgary, Alberta, René (Rachel) of Slave Lake, Alberta; 11 grandchildren;8 great-grandchildren; 1 brother and numerous relatives.

Donations may be made to the Canadian Red Cross.