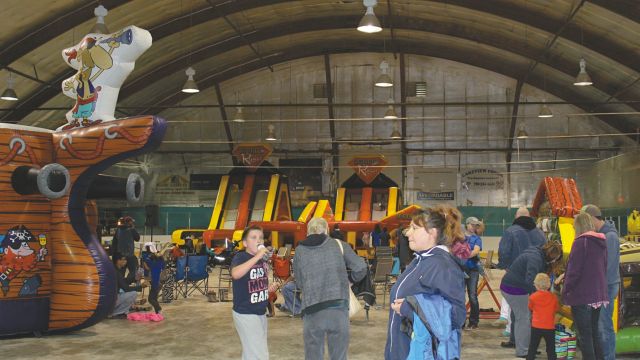 The weather proved too cold and inclement on Sunday, September 11, for McLennan Victory Life Church to hold its Church in the Park event at College Field as scheduled.

However, the event lost none of its luster or momentum when moved indoors to the H.W. Fish Arena, which provided ample room to set up the five large, bouncy castle type inflatables.

Following service with live music played by Victory Life Church members, the fun began with children running from one type of inflatable to another.

There was a theme to each inflatable with one designed as an army tank, another as a science castle, a pirate ship and a racing installation called Double Rush.

There was also a smaller farm themed inflatable for younger kids.

After prayers, lunch was also available with hamburgers, hotdogs, and a variety of snack foods. There was also coffee and refreshments available.

Apart from a minimal cost for lunch items, the event was free.

The annual Church in the Park event is a fun, generous way for the McLennan, Victory Life Church and its members to get together with the community at large.

The weather may be more reliable if the event happened in August but Victory Life Church chose to hold it in mid-September because families are back from vacation and the entire community has a chance to participate.

The event, which ran 2 hours longer this year wrapping up at 6pm, was also made possible by local sponsors and assistance from the Town of Falher and the Town of McLennan.