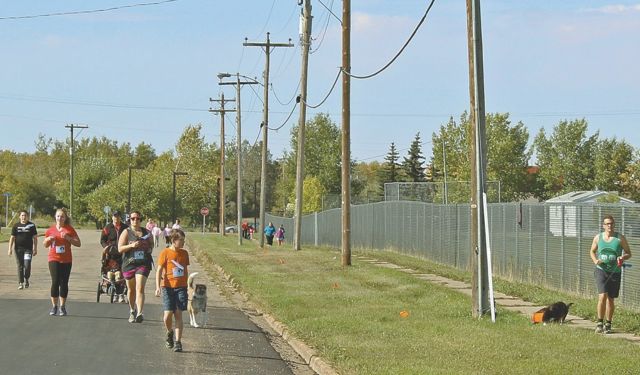 The annual McLennan Terry Fox Run took place on September 17 with the first group of participants leaving Ecole Providence parking lot at approximately 1pm.
Unlike last year’s event, which had cold, wet weather, the first group of participants set off in a warm, sunny, early afternoon.
A total of 33 participants took part in the McLennan event, raising $750 for cancer research.
This year marks the 37 anniversary of Terry Fox’ Marathon of Hope, continuing the remarkable legacy of Terry Fox who died of cancer June 28, 1981, at the age of 22.
His Marathon of Hope to raise money for cancer research has inspired millions around the world to take part in the annual Terry Fox Run, a non-competitive event established in 1981, which has raised in excess of $700-million for cancer research.
This remarkable fundraising success has been accomplished without corporate sponsorship or associated merchandising as Terry Fox had directed.
Fox did not want any commercial fanfare to distraction from his primary objective of creating cancer awareness and raising money for research.
In McLennan, participants could choose to complete the assigned, completely paved 10 km circuit or they could take the lakeside walking trails.
Those who registered for the Terry Fox Run could participate by running, walking, bike riding, or whatever way they chose and best suited their abilities.
Kristen Blanchette whose father used to coordinate the event, is now the principal organizer of the McLennan Terry Fox Run.
“My dad organized it since the beginning but he has now passed the torch to me. He still sets up the course but I do all the paper work and all the communication work with the main office,” says Blanchette.
“We appreciate everyone coming out and the schools, will be doing their run on September 28. They change the community every year and this year the event will be held in Jean Cote.”