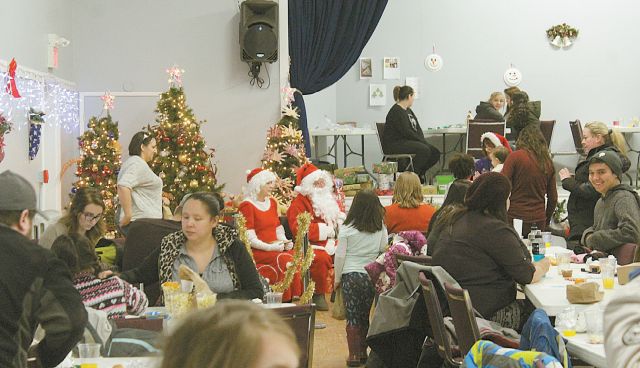 Severe cold weather had an impact on McLennan Santa Day with a slightly smaller turnout due in part to the cancelation of the hayride, it being too frigid not just for the kids but also for the horses.

Due to the popularity of the hayride with the kids the event may be added to the Family Day celebrations.

However, a large number of people still attended the event at the Elks Hall and the kids certainly appeared to be having a good time, playing around, enjoying food:

hotdogs, popcorn, hot chocolate, cupcakes and juice with coffee on hand for the adults.

The kids also had the options of watching the movie ”How the Grinch Stole Christmas,” colouring with crayons and face painting.

Of course, a visit from Santa and Mrs. Claus saw the kids enthusiastically lining up to receive a gift bag and to let Santa know what they would like for Christmas.

Even a number of adults took the opportunity to have their photographs taken with Mr. and Mrs. Claus.

There were also numerous door prizes handed out to the kids towards the end of the event and McLennan and Region Chamber of Commerce also presented a prize of $500 in ten $50 gift certificates, each redeemable at ten McLennan businesses.

Overall, it was an excellent Santa Day for the kids, and the adults who attended appeared to have also enjoyed themselves immensely.