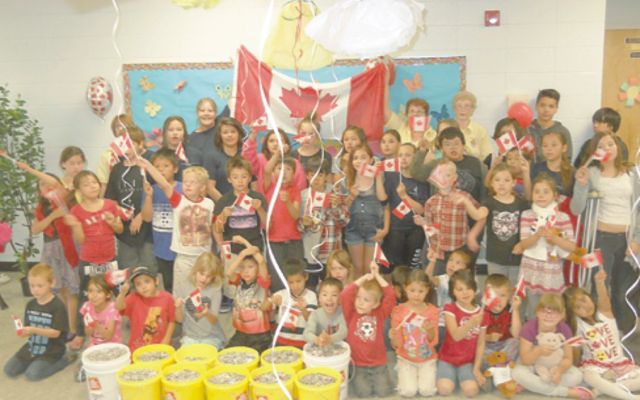 The McLennan Royal Purple is always active in the community but on Royal Purple Day, the organization puts special emphasis on the work it does and donates its time by putting on an event to mark the occassion.

Members of McLennan’s Royal Purple celebrated Royal Purple Day, June 9 by serving lunch to Ecole Providence students and putting on a party for the kids in the afternoon.

“We had lunch, pizza, juice and watermelon and in the afternoon we had a movie, popcorn, “ says Royal Purple member, Maggi Gervais.
“We also did the “tabs for tots,” that the children had been collecting since December 1. For that, we had a little contest within the school to see what Grade would collect the most. The ECS collected the most but all the children were winners so they were all treated to pizza.”

The kids collected an impressive 99.9 lbs of tabs from beer, pop cans and other beverage containers and the goal for next year is to top that.

“The kids are all excited and the community has been great, helping the kids by dropping off tabs, so we want them to continue to do that, as the money we make from the tabs goes back into the community,” says Gervais. “In conjunction with the Ladies Auxiliary we help acquire equipment the hospital needs by providing funds.”

During this year’s Royal Purple Day, the members shot a video of the event to create a record of the kind of work the organization does in the community.

“The Elks were asked to do a video so this was perfect; we had the school event and the tabs for tots. The video is for the Canada 150 Anniversary so we incorporated all of this together.”

The McLennan Royal Purple will send the video to the Elks of Canada and they will do a Canada wide promotional presentation for the Elks and Royal Purple by showing the work members across Canada do in their communities.