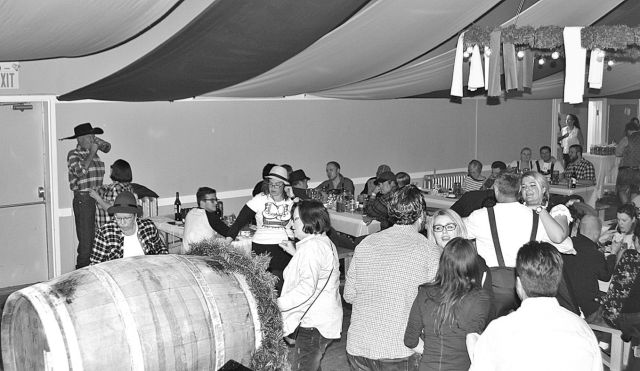 The McLennan Recreation Board’s “Oktoberfest” fundraising event was by all accounts a great success.

Approximately 130 people attended the event that offered, along with beer and great music, an extensive Bavarian themed menu of bratwurst, potato salad, sauerkraut, goulash, pretzels and strudel with the pretzels being a particular favorite.

A fifty-fifty draw and a door prize of a gift certificate for McLennan Liquor Store were also part of the event.

DJ Tyler Dupuis from Peace River, kept things lively with an eclectic lineup of tunes with a predominant Bavarian polka flavour, drifting towards mainstream rock as the evening progressed.

Mindful of keeping the event authentic, the organizers ordered Hofbrau Oktoberfest Beer, directly from Munich, which was by all appearances a great hit.

Apart from the DJ, volunteers took care of all aspects of the event, cooking, pouring beer, serving tables and security. The volunteers worked in two shifts of ten for the event that ran from 3pm to 1am.

The Elks Hall proved a perfect venue for the event being large enough to accommodate everyone and intimate enough to have the atmosphere of a real party.

Given the success of the event and it being the McLennan Recreation Boards first Oktoberfest soirée, the organizers are committed to putting it on again next year.