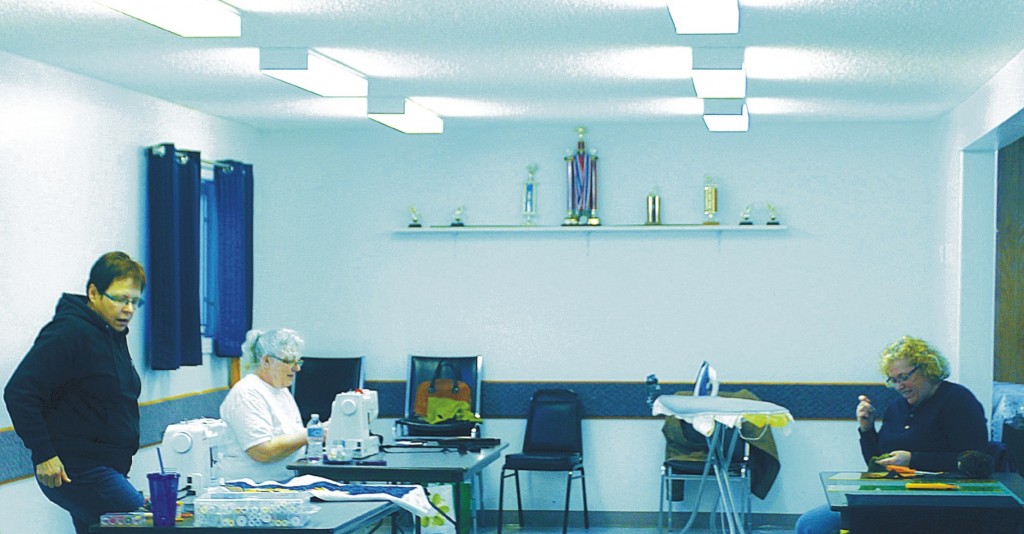 Members of the McLennan Crafts Club enjoying their Monday get together on January 5. From Left: Carole Michaud,Eleanor Daly (Club organizer) and Becki Henderson.

For those interested in crafts such as quilting, sewing or crafting in general, the McLennan Crafts Club meets every second Monday from 10am to 4pm, enjoys a good lunch together, shares ideas and tell stories while they work on their individual projects.
“We tell stories, but mostly me because I’m new. They’ve heard all of each other’s stories,” says group participant Becki Henderson humorously.
The Craft Club, established for approximately two months held its first meeting at McLennan Golden Age Club on October 26 and of course, as with a new initiative, the club it is anxious to get the word out to crafters in the area.
“I used to work at the McLennan Post Office and I was approached by a couple of ladies who said it would be nice to have a craft group in town here, because the closest place is in High Prairie which has the quilt guild,” says club organizer Eleanor Daly. “Now that I don’t work at the Post Office anymore, I decided it was a good time to start something.”
Apart from welcoming everyone who wishes to work at a specific craft, the group encourages people who have any questions about how to develop their skills to drop by the Craft Club because collectively the group is an excellent resource.
“Among all of us we have a world of experience,” says Becki Henderson.
“And we all bring different knowledge to the table,” adds Eleanor Daly. “And anybody who just has an idea and thinks they would just like to try something, we would like to see them come along, because we like to learn as well.”
The group meets next on January 18 and subsequent meetings take place on February 1, February 22 and March 7. Due to Family Day, the February 15 meeting will not take place. For more information call Eleanor at (780) 324-2851 or Gina at (780) 324-3509. Updates are also available on Eleanor Daly’s Facebook page.