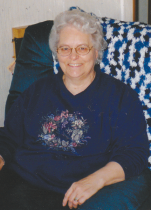 It is with great sadness that the family of Marie Jeanne Paradis of McLennan, Alberta, announces the passing of our mother, Memere and Grand-Memere on March 15, 2018, at the age of 87 years.
She was born in Donnelly, Alberta on November 10, 1930 to Adelard and Leontine Richer. She was raised in McLennan and as a young adult, worked for Loretta MacMillan at Loretta’s Dress Shop.
When she was 19 years of age, her parents sent her to a convent in Montreal. She spent about one year there and returned home to marry Real Paradis on June 26, 1951. From this union, there were six children.
Real and Marie Jeanne moved to Wetaskiwin, Alberta where they lived for 10 years and moved back to McLennan in 1971.
Marie Jean managed the Kim Lake Apartments and worked at the Sacred Heart Hospital in housekeeping, and then as a ward aide until her retirement. She also helped Loretta MacMillan in her Hair Salon.
Marie Jeanne was very active with the Catholic Women’s League (CWL) at St. John the Baptist Parish in McLennan for more than 40 years. She held all the elected positions, from president, secretary and treasurer, as well as convenor. She was active with Our Lady of the Lake Nursing Home Auxiliary. She enjoyed singing in the church choir. She loved to sew, crochet and knit for her children and grandchildren. She loved hosting family gatherings. Marie Jeanne and Real loved to travel in their early retirement years.
She will be dearly missed by her children, Lise (Albert) Mikulecky, Celine Paradis and Paul (Debbie) Paradis, Diane (Richard) Deslauriers, Doris (Ted) Wylie, Alice (Danny) Dumont, 14 grandchildren and 20 great-grandchildren. Also left to cherish her memory are sisters Murielle St. Louis and Julienne L’Abbe, many brothers-in-law, sisters-in-law, cousins, nieces and nephews.
Marie Jeanne was predeceased by her husband of 65 years, Real, her parents, Adelard and Leontine Richer, her brother, Fernand, sisters, Angele Lamoureux, Clemence Lamoureux and Francoise Cooke.
A celebration of life for Marie Jeanne will be held at the St. John the Baptist Cathedral in McLennan on Friday, April 27, 2018 at 10 a.m.