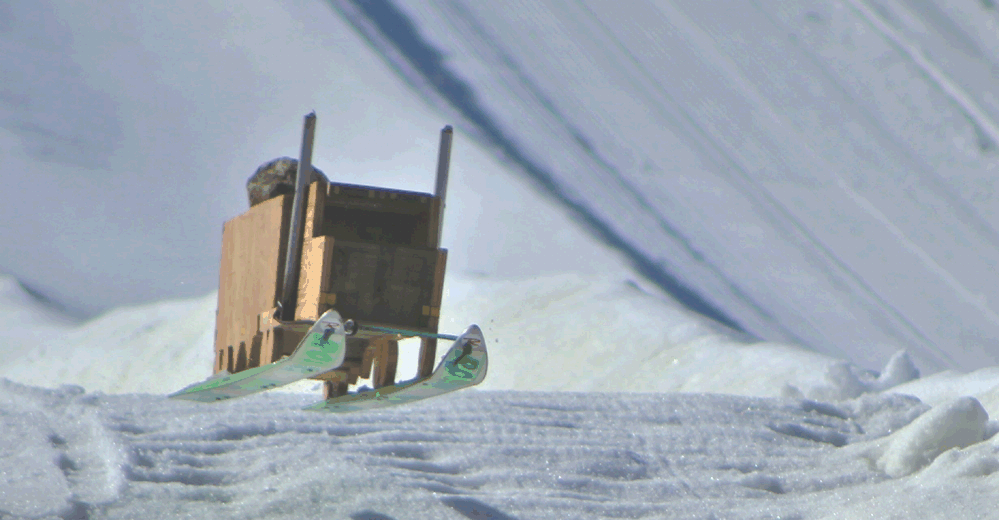 The winner, a simple rig that just kept on trucking . 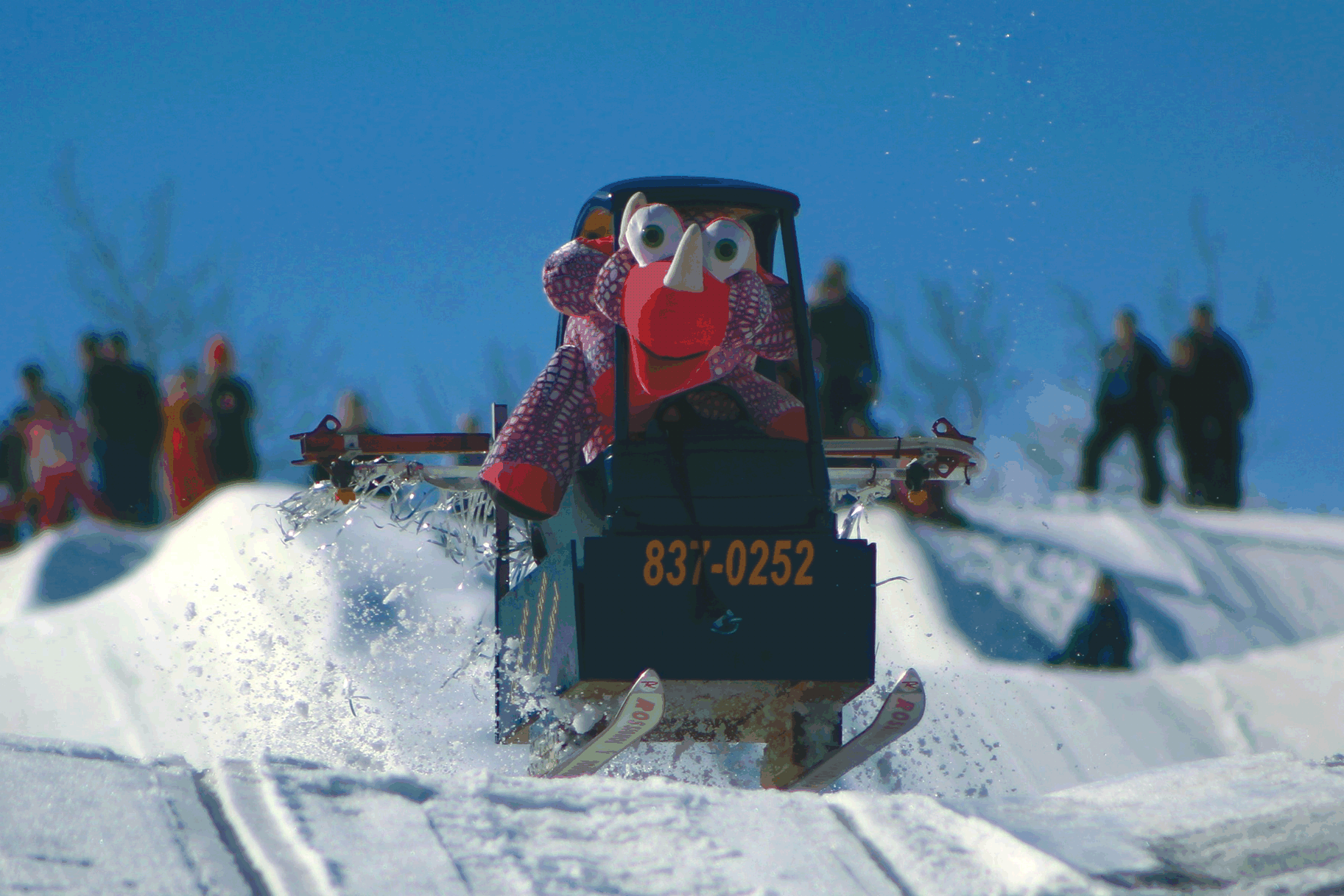 The daredevil downhill racer above, while not the winner did prove the most colourful and photogenic.

Little Smoky Ski Area wrapped up the season on March 27 with the second annual Downhill Dummy Race with 5 inventive rigs competing plus a Little Smoky Easter bunny piñata.
“This is just the second year and we would like to make it an annual event,” says Little Smoky manager Clem Bourgeois. “Last year there were twelve entries, but this year we had only five. We advertised about three weeks ago so maybe we left it a little late.”
With more awareness, the downhill dummy race would certainly catch on. Having a fun, competitive edge, the concept leaves lots of room for imagination and demands some basic sense of engineering and aerodynamics as momentum and stability are key factors along with creative design.
Even if the number of entries were down from last year, there was still a lot of enthusiasm from the visitors to the hill and those who came to root for the competitors who were hoping to win a season pass for most creative, best crash, longest jump and last dummy standing.
Before the finale of launching the Little Smoky Ski Area Easter Bunny, the kids went down the slope and waited for the candy-filled piñata.
The temperature reached 10 degrees and while the snow had melted somewhat on the slopes, everyone seemed to be having a good time and enjoying the spring weather typical at the end of the season.
“It was an alright season. It wasn’t our best but it was alright, better than last year,” says Bourgeois. “The staff put a lot of effort into keeping everything running smoothly and the Hill Top Café and cook Bobby Dlugosz had a particularly busy season.”
Bourgeois points out that the schools are a key part of support for Little Smoky and that it is important to cultivate a relationship with the schools and keep them involved.
“If we lose the schools, well that is our main support,” say Bourgeois. “We are wondering where Smoky River is, those schools could do better. From Swan Hills cut off, they drive to come here. They come from High Prairie Elementary, Le Crete, Fox Creek, Slave Lake and everywhere in between.”
It is ironic that compared to Big Lakes and Green View which comprise 32 percent and 31 percent respectively of the visitors to the hill, and with Slave Lake and visitors from elsewhere they make up 79 percent where as Smoky River only accounts for 21 percent.
“The other schools probably make it part of their gym curriculum where as the schools in Smoky River have different priorities,” says Bourgeois. “They don’t take advantage of it on a school day. Or maybe, everyone is a little spoilt that they can come out here anytime where as Slave Lake if the bus is going they make sure to jump on it.”
Bourgeois also says that it is best to get the kids out early enough in the season so they can come back on weekends and enjoy themselves.
“The Grade 3’s need a kick in the bum to go try it but then they love it and they come all weekend right. A big part of gaining support in the future is to get them interested as young as possible.”
Little Smoky Ski Area added a big loop completed in late December, which delayed this season’s opening until early January.
“By adding six more snow guns, which we are hoping will be approved in the April budget we are hoping to open up the first weekend of next December.”
With some of the crew working until the end of April, lift maintenance will also be undertaken so things will be all set for an earlier start next season.