So many had come to join in commemorating the veterans who served their country and those who have given their lives in the line of duty that the Elks Hall in McLennan was filled to capacity with standing room also at a premium.
Deacon Bouchard began the ceremonies with by leading all present in “The Lord’s Prayer,” a prayer, which he said was often the only one soldiers could remember in the midst of battle.
McLennan Royal Canadian Legion Branch 153 President, David Champion, began by thanking those who came and he expressed his gratitude for such a large turnout. He spoke about this year being the 100 anniversary of the writing of “In Flanders Fields”, composed by Canadian Doctor John McCrae.
“In Flanders Fields” was written on May 3, 1915, the day after the burial of McCrae’s friend, Lieutenant Alexis Helmer, who died at Ypres. The poppy, which is the central image of the poem, grew prolifically on the battlefields and in the cemeteries of Flanders and due to the increasing popularity of the poem, the poppy became a pivotal memorial symbol to the fallen.
G.P. Vanier, vice principal, Pam Heckbert played the Last Post, followed by two minutes of silence, to remember fallen comrades and those who have passed away since they last gathered on Remembrance Day. Pam Heckbert then played reveille.
Marg McCuaig-Boyd, MLA Dunvegan Central Peace, spoke about the personal significance of Remembrance Day and about her grandfather, a veteran of WWl who started out in the 130 Highlanders from Calgary, but when in Europe became a member of the 49th Battalion in Edmonton. McCuaig-Boyd also spoke of her great uncle Cliff, of the 7th Battalion in Vancouver, a casualty at Vimy in WWl.
“When I visited Vimy last year, it was pouring rain and cold as we did a little tour of the trenches and I got whinny for about 30 seconds,” says McCuiag-Boyd. “I was thinking that I am cold, and then I remembered that this is probably what they lived through for days on end, not just a few minutes in my nice warm clothes. So I told myself to suck it up and remember that is what they did for us. Let us never forget.”
Another guest speaker was McLennan Parish Priest, Father Jean. While not being a Canadian citizen and having no family or friends who fought in the Canadian Forces, Father Jean said being from the Congo and having lived in others parts of the world, he knew firsthand what it is like to be caught in the middle of armed conflict.
Father Jean also spoke about the criteria that must be met before it is morally permissible to take up an arm offensive and fight a ‘just war’ against an oppressor and how Canadian veterans fought such a just war.
H.W. Fish bursary for $500, presented by Captain Don Fish went to Ashley Oullette. Johann Cote, present the bursary on behalf of the Royal Purple to junior member Colleen Marcoux, Bachelor of Arts student at Concordia University who plans to become a Clinical Psychologist. Legion President Dave Champion presented a bursary of $500 to Captain Verna Ogg on behalf of High Prairie Air Cadet Squadron.
After the wreath laying ceremony, which saw approximately two dozen wreaths placed at the Elks Hall, David Campion once again thanked everyone for attending. Champion also reminded everyone that following the parade and the wreath laying at the McLennan Royal Canadian Legion cenotaph that lunch would be served at the Legion and that at 6 p.m. a roast beef supper by donation, which has become a time honored Remembrance Day tradition. 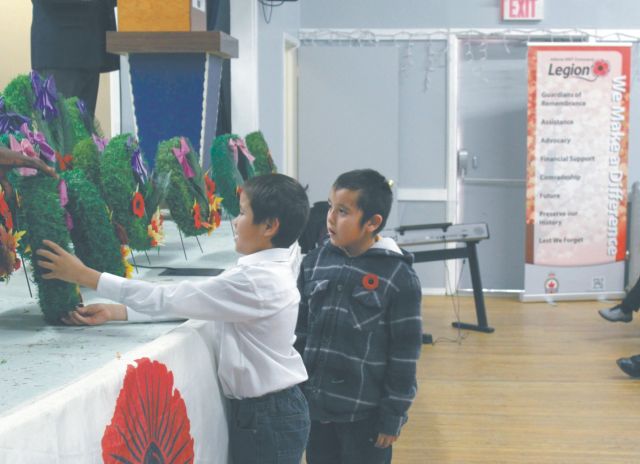 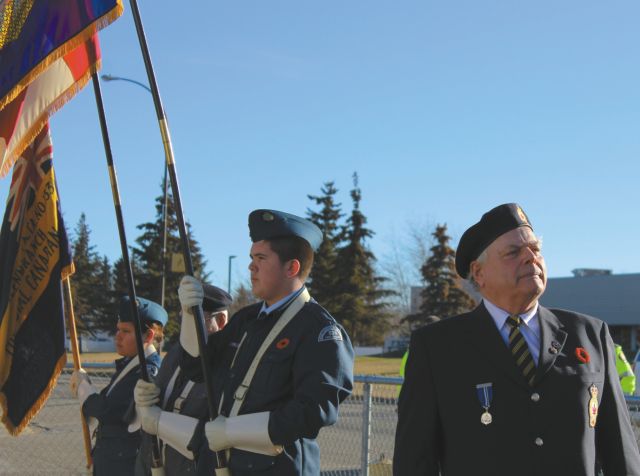