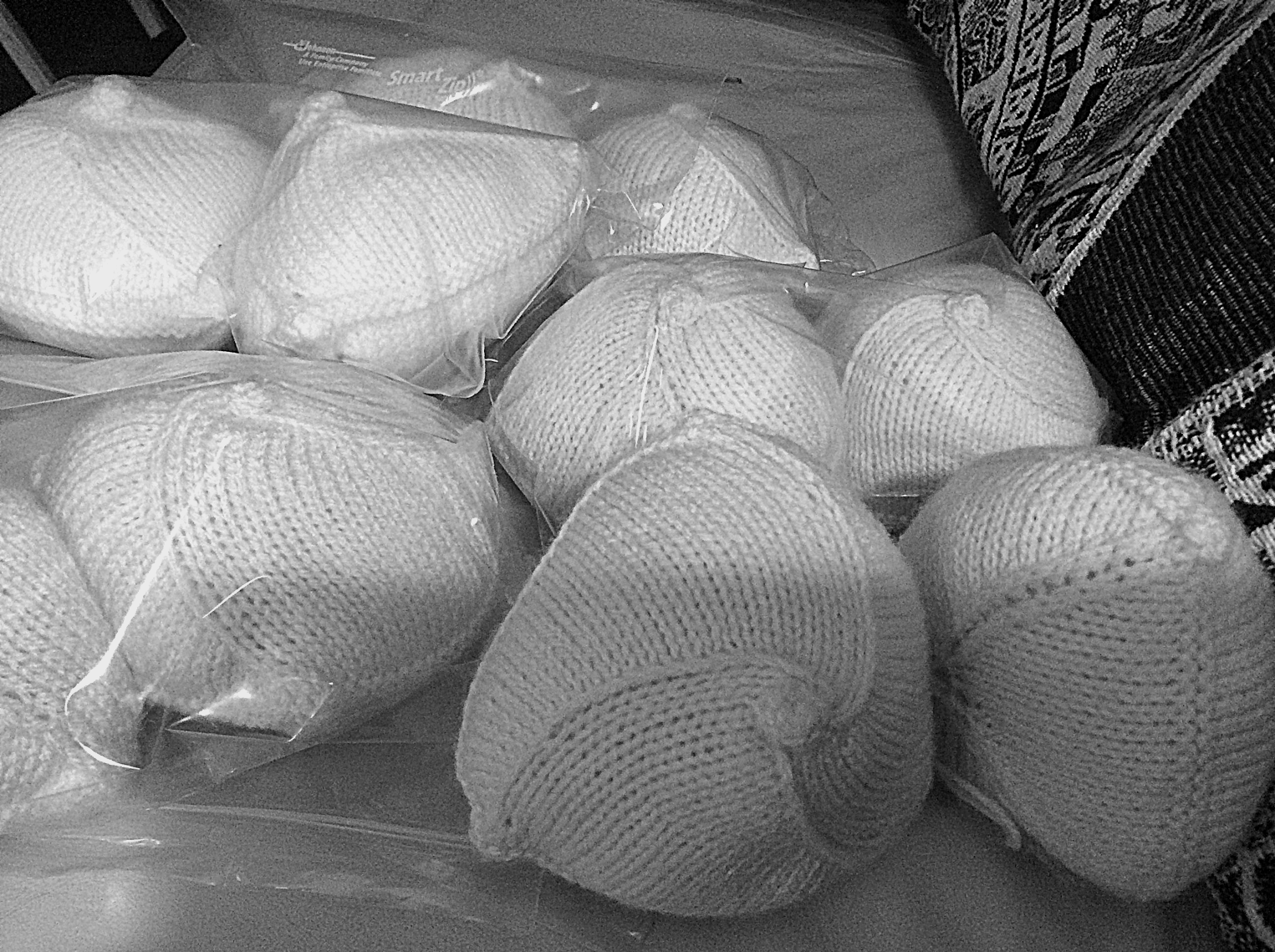 The initiative began with a woman in the US who had a mastectomy and asked a friend if she could help her design a pattern to make breast prosthesis that are knitted and easily adjustable.
From that inauspicious beginning, the initiative grew and the women decided to open up the concept to other women and put the patterns online and now under the banner of Knitted Knockers the knitted prosthesis are available to women in numerous countries around the world including Canada.
Generally, women make the prosthesis to fulfill a local demand catering to women in their region who have had a mastectomy. However, people in this region can also give them to the Cross Cancer Clinic in Edmonton. One of the tenets of the initiative is that those who make the inserts donate their time and materials and that the product is free of charge.
On the suggestion of McLennan librarian Maureen Fisher, Theresa Demeule, a nurse at Sacred Heart Community Health Centre checked out the Knitted Knockers website, looked at the patterns and decided it was something that she could do.
“It is basically asking knitters to volunteer their time and their materials to make the breast prosthesis for other women and to provide them free,” says Demeule. “It is about women helping women, it’s about giving.”
Demeule made about five sets and at the end of the week, she went back to Maureen Fisher wondering what she should do with them.
“Well, Maureen was very thankful because she has a friend who had been on a waiting list for two years to get a set of these things.”
Recently, while taking a patient’s medical history, Demeule learned that the patient had a double mastectomy. Although the woman used the silicone breast prosthesis, she was anxious to try the knitted type because they are light and are not hard on any incision lines. The Knitted Knockers are also adjustable, not as hot as silicone and fit easily in a normal bra.
“So I gave her a set,” says Demeule, “and I received a very nice note later saying:
Thank you so much for the Knitted Knockers. They are definitely more comfortable, lighter and you can choose your size. I can see these being a big seller, especially in hot temperatures.
It is important to emphasize that no one is selling the Knitted Knockers that they are always given free of charge.
The reason the knitted prosthesis are lighter and generally more comfortable is that they are made of very specific light materials.
“They are made of a baby weight or sports weight yarn, cotton yarn that’s washable. You can actually throw them in the washer and dryer. We don’t use any wool, any heavy yarn because that wouldn’t work.”
She says that so far the demand is primarily by word of mouth and hoping not to fall behind she has told the women of the Royal Purple and the Catholic Women’s League so she is confident that she will not be the only one making them.
“I just started about a month ago and I have given away about five sets at this point and probably have five more sets made. When I started making them, I thought it is an easy thing to do while my husband is watching the hockey game and I like to have something to do in the evenings.”
For those interested in learning more about making the prosthesis, Demeule says that the ideas and pattern can be found on www.knittedknockers.org. If a woman would like a set of Knitted Knockers, they can contact Theresa Demeule at gtdemeule@gmail.com or call 780-324-3881 and include the cup size with their request.