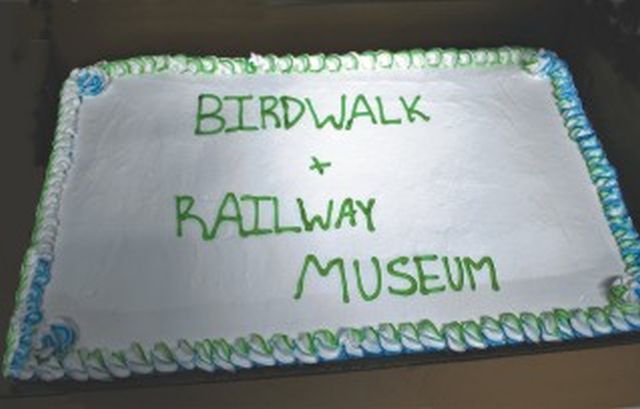 Due to wet, cold weather the BBQ venue was moved from the deck of the Interpretive Centre to the Elks Hall.

The change of venue did not lessen the sense of occasion and the BBQ was, as always, a pleasant social event with almost a full house coming out to enjoy barbequed hotdogs and hamburgers along with a variety of salads, juice and coffee.

There was also a large, inscribed celebratory cake to mark the occasion, which was enjoyed by many who attended the event.

Caitlin Langelier, Megan McNeil and Madeleine Jordan graduated from G.P. Vanier last June and will be attending college and university this fall.

Justine Dubrule is returning to Grant MacEwan University in Edmonton to continue her journalism studies.

The judges for this year’s awards were the 2017 best garden award winners, Vanessa Wurm and Nancy and Lawrence McNeil.

Kimiwan Lake Birdwalk Interpretive Centre opened part time in June and ran fulltime hours through July until it closed for the season on August 26.