École Héritage is the host of this year’s Alberta Schools Athletic Association’s 1A Boy’s Volleyball Provincial Championship. The school held an opening ceremony in the gym during the morning of Nov. 26. Two members of the McLennan RCMP Detachment, Reeve Robert Brochu for the M.D. of Smoky River No. 130, Councillor Sandy Primeau for the Town of Falher, Principal Nicole Walisser and other dignitaries entered the gym first. Then each of the teams entered, with the hosting Lynx team entering last. The mascot gave high-fives to the team members as they entered. With Joel Lavoie leading, the school band performed ‘O Canada’ in their own unique style. Deacon Reg Bouchard offered a prayer for the event. Then the dignitaries spoke in turn, including the principal and a video clip of her speech is on the Smoky River Express’ Facebook page. Dane Vandeligt swore an oath on behalf of all players, that they would play fair and would not use steroids or other performance enhancers. Then it was time to play the first games of the championship. Some of the round robin games were also played at Georges P. Vanier that day. Watch for more next week. 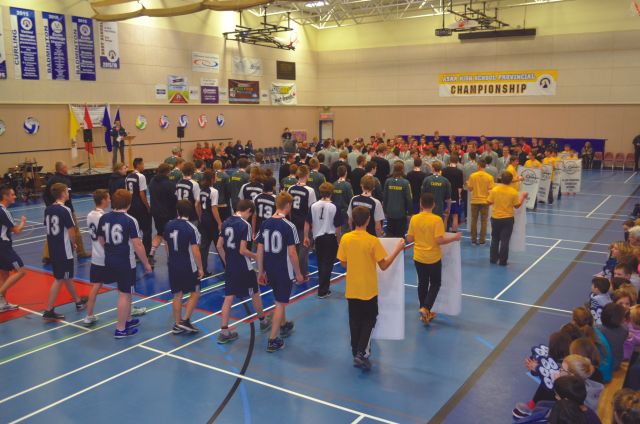