“The planning happens in early September: buying turkeys locally and we buy about 355lbs of pork for the pies,” says Guy Parish Council member Robert Maisonneuve, who took on the role of MC for the evening.

As the date draws near, a considerable amount of work and coordination goes into preparing for the actual event with work beginning a few days before and of course, numerous volunteers are on hand the day of the event.

“Twenty-five to thirty volunteers work on the Sunday but we start preparing things on the Friday. Everybody has their own job to do so it’s basically the same person does the same thing every year,” Maisonneuve points out and adds, “ It goes pretty smooth because we have some excellent people. For a small community our volunteers are fantastic, they put a lot into it.”

The money raised from the parish bazaar goes towards general revenue to run the church: pay gas, power, water, the upkeep of the church and wages for our parish priest.

While it was not their biggest attendance, this year had an impressive turnout with 259 people.

“We usually make enough from the bazaar to keep the church going without losing money for the year,” he says. “It is a very successful fundraiser and we get really good support from a lot of people from all the towns around including McLennan, Falher, Donnelly, Tangent, Girouxville, High Prairie and Valleyview. It is an annual event, so people know it is the first weekend of November every year, so people show up.”

Unfortunately, the Parish Council President was unable to attend this year’s bazaar.

“Our president Jules Aubin was not there because he was drawing grain. They’re drawing grain twenty-four hours a day so he couldn’t come out,” says Maisonneuve.

Along with a great supper with an abundance of home cooked turkey and tourtière with homegrown potatoes and vegetables the supper is a great social event for people to get together from across the Smoky River Region and the neighbouring areas.

Those who attended also had a chance in ten draws for prizes donated by local businesses.

Maisonneuve also emphasises that the volunteers, some of whom are not parish members are vital to the success of the Guy Parish Bazaar, which has be running annually for over fifty years.

“It is the community, not just the Catholic Church who give us support,” he says. “And of course, the people who come from all around including some new people this year that we hadn’t seen before. We get great support from all those people.” 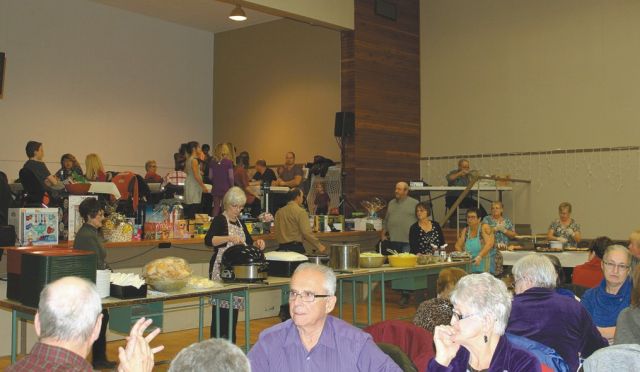