There was some serious time travel going on at G.P. Vanier on the evening of June 14, with the high school drama class performing in an original play that the students wrote and directed themselves with the art class providing the impressively designed stage sets.

The play, called “The Greatest Grandpa Chase in the History of the World” was a big hit with the audience and solicited a lot of laughs.

The students had as much fun performing as the audience had watching the play.

It was a lively story with the two principle characters moving through time in search of their grandpa.

Having to travel back through time in their quest to find their eccentric grandpa, a scientist who had invented a time machine, they encountered different, strange individuals and bizarre situations ranging from pre-historic times, to puritans and witches, to the Wild West, the London of Sherlock Holmes and finally to the 1970’s musical stage production.

It was a credit to the students acting and writing abilities that with a relatively large cast and varied scenes that seamless continuity and high energy were sustained throughout.

A little song and dance routine from the 1950’s themed movie “Grease” provided the finale, ending the play on a high note.

The hour-long play went by quickly, which is always a good sign.

Some of the younger members of the audience expressed a wish that it went on longer, which shows that the drama students have learned the golden rule of show business; always leave the audience asking for more. 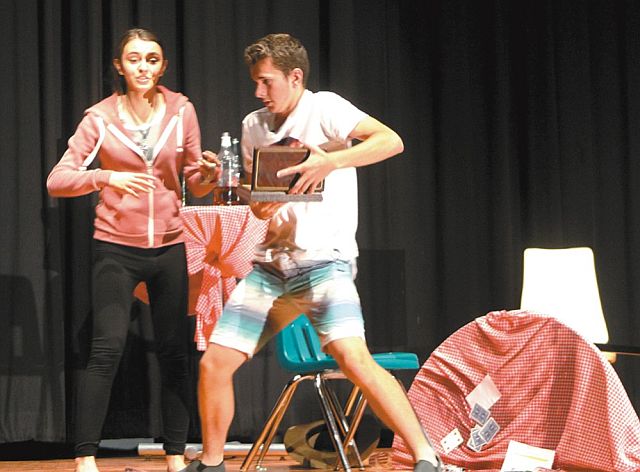