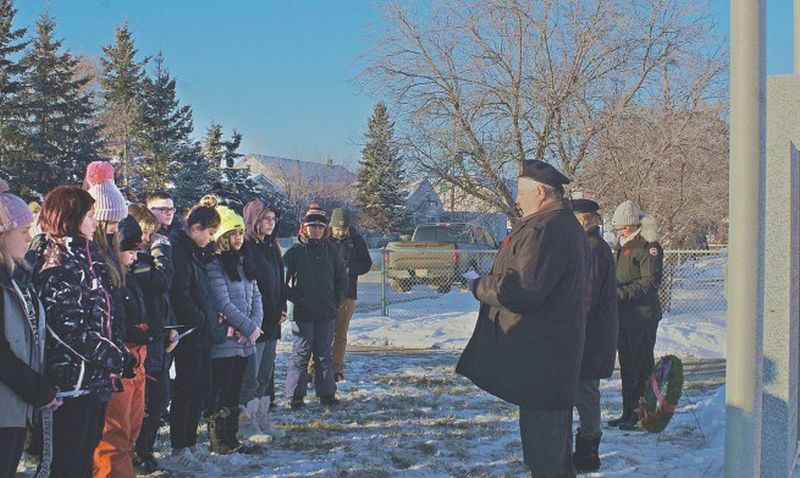 The students took part in a ceremony at the McLennan Royal Canadian Legion #153 cenotaph and then went on to place poppies on veterans headstones at cemeteries in McLennan, Donnelly, Guy, Falher, Girouxville and Jean Cote.

No Stone Left Alone is held annually during veterans week, when students across Canada visit local cemeteries to lay poppies on veterans gravestones to honour those who served.

In 2011, Edmonton woman Maureen Purvis, established “No Stone Left Alone” in recognition of the sacrifice of the Canadian men and women who have lost their lives in military service.

Her mission is to see all Canadian veterans, in whatever cemetery they are buried, have a poppy placed on their headstone around Remembrance Day.

G.P. Vanier band teacher Brock Whalen played the “Last Post,” before a student laid a wreath at the cenotaph.

The group then boarded the bus to lay poppies on veterans gravestones before making the trip to the other five cemeteries in the region.

Anyone who thinks a veteran’s headstone may have been overlooked and did not have a poppy placed on it, call Marion Lessard atG.P. Vanier School at (780) 925.3959 or email her at mlessard@hpsd.ca.