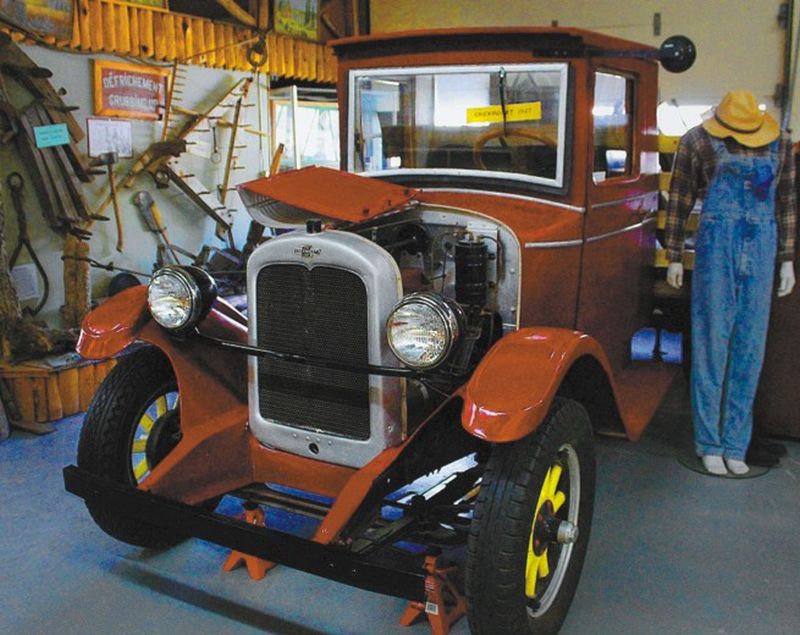 The Girouxville Museum’s collection of local artifacts tells the story of the way of life of the early Francophone pioneers, missionaries and First Nations but also outlines the economic, technological and social development of the people in the region.

The collection is extensive, representing the working, domestic, family and community life and through the collection, one can trace the historical trajectory from the early settler days up to the more recent past.

There are also those incidental everyday items such as cameras, radios, gramophones and practical communication systems such as airplane radios, which collectively tell a particular story as they lead from the advent of electronic communications to the present time when cameras and phones are ubiquitous and central to every aspect of our lives.

Father Clement Desrochers, who became curate of the parish in 1941, established the collection to preserve a tangible record of life in the region dating from the settler era.

Recognizing that the local way of life was changing and that many of the artifacts of the pioneer period could be irreparably lost, Fr. Desrochers began collecting items in 1954 and was instrumental in the construction of the original phase of the museum, which opened in 1969.

Born in 1910, Fr. Desrochers, passed away in 2003 at the age of 93 and is buried in Notre Dame de Lourdes Parish Cemetery in Girouxville.

Predictably, considering the vocation of its founder, the Girouxville Museum has a large number of exhibits reflecting the Francophone Catholic ethos predominant in the immediate region. These include priests’ vestments, the monstrance and other vessels, crucifix, statues and the portraits of Oblate Bishops who served in the Canadian North West.

There are also works by local artists Leon Tremblay and Alfred Gaboury.

Along with the social, economic, religious and exhibits of domestic life, the natural environment is also represent with cougar, bear, beaver and other animals and wildfowl native to the area, which gives the museum a broad context.

However, the Girouxville Museum collection is so large and eclectic, nothing short of paying the museum a visit could do it justice, there being in the realm of 6,000 artifacts on display.

Unlike many institutions of its kind where the visitor files by the exhibits very much as a detached observe, the Girouxville Museum provides a very intimate and all-encompassing picture of the development of the region we know today.

For local people, whether an avid local history enthusiast or the layperson with a healthy curiosity, the Girouxville Museum will certainly offer a valuable experience.

It is also an excellent way to introduce visiting friends and relatives to the cultural, historical and natural life of the region.

The museum coordinator, Tristan Beaudoin, is certainly in his element as he admits to being a local history buff.

Having started in the coordinator position at the beginning of May, Beaudoin says he continually makes interesting discovers in the process of familiarizing himself with the collection.

Beaudoin began his university studies in political science and Spanish at Camosun College on Vancouver Island and is transferring to Montreal’s Concordia University in the fall to complete his remaining two and a half years.

On behalf of the Girouxville Museum, he extends an invitation to come see the extensive collection.

“We invite residents and visitors to drop by and come check out the interesting variety of artifacts and displays,” he says. “We are currently offering school tours and look forward to sharing the community’s history with you.”

The museum on located on Main Street Girouxville is open 9.30am to 4.pm Monday to Friday from May 1 to August 31.