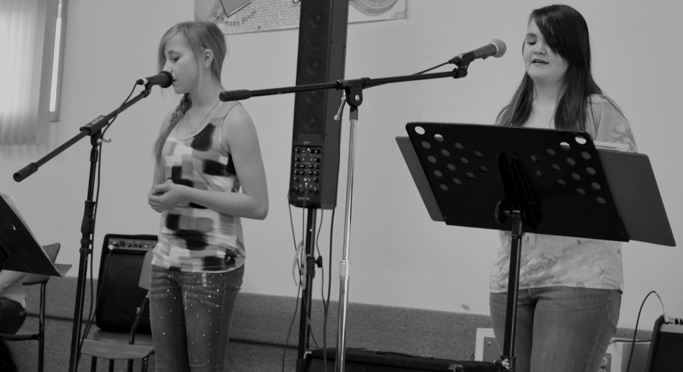 Katelyn Lambert, left, and Rebecca Edmunson performed ‘If I die Young’ and ‘A Heart like Yours’ for La Société Historique et Généalogique de Smoky River’s talent show at the Girouxville community hall on March 15, 2015.

The public is invited to the Galala, a francophone event that will feature students and adults performing songs.
It will be held at the Girouxville community hall, beginning at 2 p.m. on March 13. It is a fundraiser for the La Société Historique et Généalogique de Smoky River and the ACFA is partnering with them.
Students at Ecole Heritage are taking workshops to prepare for the event. Also, Ariane Cote will perform during the second half of the event, and Joel Lavoie will accompany her on his guitar.
The Societe Historique de Smoky River held the second of two fundraisers in 2015.
The first was held at the Elks and Royal Purple Community Hall in McLennan on Feb. 22, 2015 and the other was at the Girouxville community hall on March 15, 2015. All proceeds from both talent shows went towards the operations and projects for the societe.
Among the performers at the Girouxville event were cousins Katelyn Lambert and Rebecca Edmunson, who sang ‘If I die Young’ and ‘A Heart like Yours’. The Isert family also performed, including Cheryl Isert, Dwayne Isert and Elizabeth Isert.