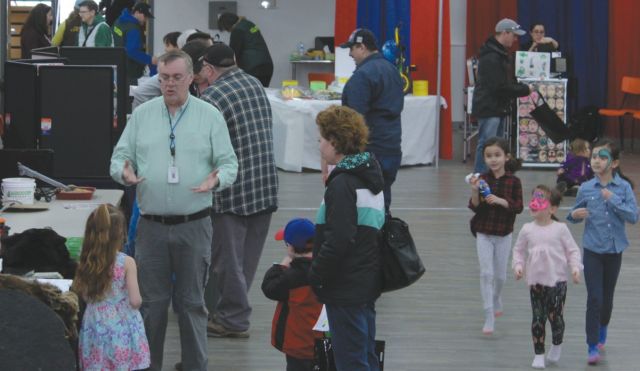 Tom Henihan
Express Staff
@SmokyRiverExprs
In conjunction with the SARDA Trade Show, Farm Safety Day took place at Centre Chevaliers from 10am to 4pm on March 18.

While the event provided a lot of fun things for kids to do, such as bouncy castles, face painting, mascots, a ventriloquist plus a free hotdog lunch and lots of free stuff at the tables, its primary focus was serious and extremely important.

The objective of the event is to educate children, making them aware of what to look out for on the farm so they can keep themselves safe.

There were approximately 10 displays addressing the most common, hazardous activities for children on a farm.

Though not an imminent hazard for kids, Chiasson and Klunder emphasized the importance of getting the message across to children.

“When we get the message out to kids, first they tend to remember it and when they go home they often remind the adults that they have to click before they dig,” says Chiasson.

Hitting gas lines is a big concern as it happens quite often, but since introducing the new program the number of instances had gone down so the program is obviously effective.

When someone clicks www.clickbeforeyoudig.com/ they are asked online what they are planning to do and their address. A utility search is done to locate each utility. There are eight colour coded utilities listed.

A station that had a very direct and important message for kids was Alberta Brain Injury Network addressing ATV head injury trauma.

“The purpose of my station is to make kids aware that the brain is the control centre of one’s body so if you injure your brain the chances are that something is going to be impacted,” says service coordinator Michelle Hill.
“I really impress on them whether they are on the farm or wherever, if they hop on their quad, side-by-side or their bike they should always wear a helmet to protect their brain.”

Eighty percent of ATV injuries are brain injuries and that is the result of people not wearing a helmet.

Hill says that kids are beginning to understand the importance of wearing a helmet but it starts with adults setting an example.

“If children see their parents wearing a helmet they tend wear one also. It is like the seatbelt law, when it was first implemented people were slow to utilize it but now the kids don’t know any different,” she says.

The more expensive a helmet the better it is but Hill says that the key thing is having the helmet fits one’s head properly.

“If the helmet is way too big obviously it is not going to prevent an injury because it is going to move around when you fall.”

Because Styrofoam dries out, bike helmets need replacing every five years and if someone has a crash with a helmet it should also be discarded.

As a last word Hill said she would like to remind people that “before you think you won’t need a helmet today have a word with yourself.“

While the goal of Farm Safety Day is to reach kids from ages 6 to 16, the information is also an important reminder to adults about being vigilant especially where children’s safety is concerned.