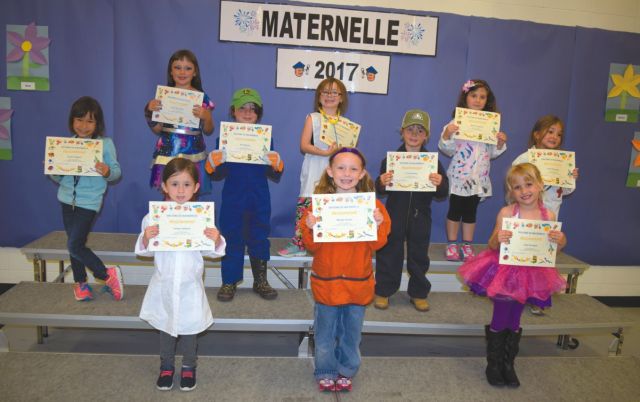 Ten French kindergarten students at Ecole Routhier are moving up in the world next fall.

But before that, they had their moment to shine in the spotlight, as their teacher held a graduation ceremony for them.

The ceremony was held in the small gym in the afternoon of June 15, with many parents and grandparents attending.

Jenny St. Jean, their teacher, offered her thoughts about each student and she led them in singing several songs in French.

Each student dressed up in the type of role they want to be when they grow up. They also told their parents and grandparents what they liked about kindergarten.

A slideshow highlighted the many activities their participated in during the school year. The pictures included carving a pumpkin at Halloween, singing in the school Christmas concert and visiting the McLennan RCMP Detachment.

The ceremony ended with the students receiving their certificates, and drinks and snacks being served to guests.