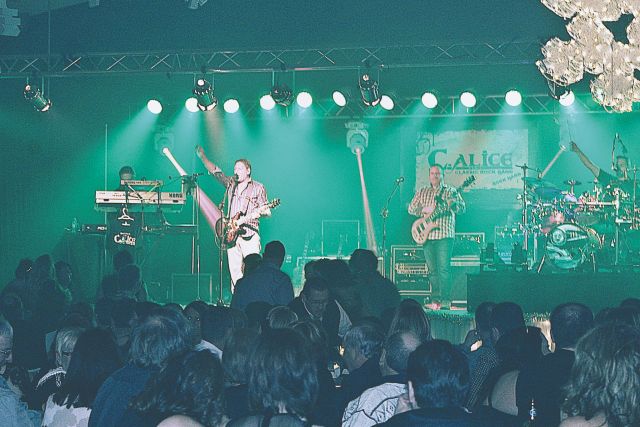 Approximately 350 people attended the “Fire on Ice” themed, formal dinner and dance event, which included performance and live musical entertainment along with a silent auction, 50/50 draw and secret trip draw.

The menu for the evening included appetizers, chicken, ham, vegetables, salads and a variety of deserts. Amber Ouellette catered the event.

The first entertainment act, Circle of Hell Fire Show, gave exciting expression to the theme of Fire on Ice.

Circle of Hell Fire is a family affair comprised of Doug and Susan Thompson. Susan, opened their performance bringing her training as a belly dancer and her dexterity with fire into play.

Doug performed next, masked and tattooed to great dramatic effect. Circle of Hell Fire closed the set with a segment choreographed for both performers.

The musical entertainment for the evening was C.Alice, a classic rock, cover band based in Peace River. The band, that has been together since 2010, certainly lived up to its own credo: Always energetic, never boring and sometimes surprising, rocks hard and loves it loud.

C.Alice’s musical repertoire runs the gamut from 70s rock to the present.

Bidding on the silent auction closed at 11pm and the secret trip winner announced just before midnight. The 50/50 payout came to $1,710 with a $500 Coach Purse. Christine Chenard won the secret trip and was delighted to discover that she is going to Tampa Bay Florida. The trip also includes tickets to an Oilers and Tampa Bay Lightning game.

A vital dynamic in creating the proper air of formality and sense of occasion is the design and décor of the venue. To that end, due to the physical and creative efforts of Smoky River Minor Hockey parents, Centre Chevaliers was ornately and aptly set up for the lavish gala event.

Of course, the annual Christmas Gala has widespread support from individuals and businesses in the region, in the manor of volunteers, cash sponsorship, door prizes and raffle sponsors and silent auction donations. Businesses in the area also offer their support by holding their Christmas staff party at the event.