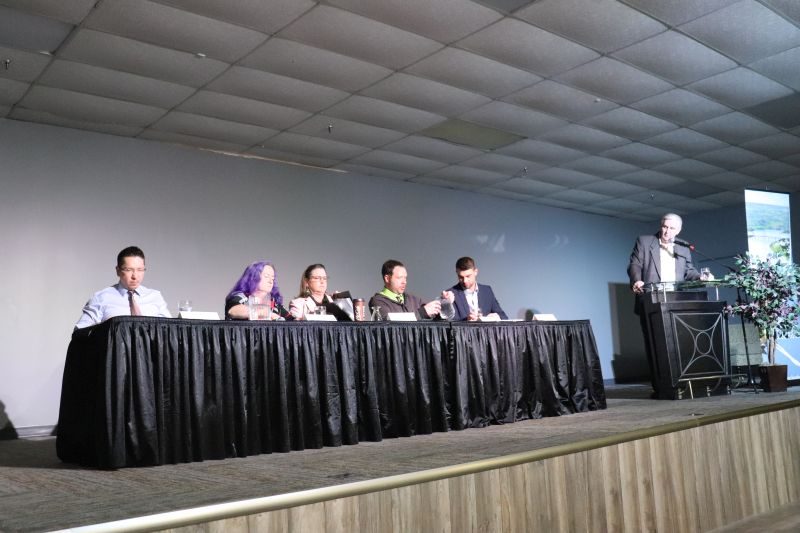 All five party candidates in the Peace River constituency squared off for the first time at the Peace River forum on Monday evening. The forum was hosted by the Peace River and District Chamber of Commerce and moderated by Randy Hodgkinson of Community Futures.

The Peace River forum focused largely on economic topics, including the deficit, pipelines and the much-maligned carbon tax.

Liberal candidate Remi Tardif outlined his party’s unique economic plan to eliminate income taxes entirely for a portion of the population, and instead bring in an HST in order to help Alberta diversify away from oil revenue.

“The Alberta Liberal Party projects a big chunk of money in corporate welfare, about 500 million that could be amassed and brought back to the public service. Plus having an HST would tax people from other provinces and give us another billion,” Tardif said.

Freedom Conservative Party candidate Connie Russell stated several times that her party would stop equalization payments to the east in order to keep more money in the province.

Andy Gauvreau asked where each party stood on the future of the carbon tax, saying, “The NDP has placed its political fortunes on the carbon tax, the assumption being if we consume less, we’ll pay less.”

“Yes, the philosophy of the carbon tax is to change people’s behaviours, so that you are more aware of how you’re using a non-renewable resource, and ideally that you’re going to be prompted to use less where you can,” NDP candidate Debbie Jabbour answered. “That’s a good thing for our environment, and that’s a good thing for our children and grandchildren. The reality in Alberta is there is also a federal carbon tax that if we didn’t have an Alberta system in place then we would be subject to the federal one, so we believe that’s it far more important to be in control of how we want distribute and use those funds so we can use them back into programs that encourage more energy efficiency, all kinds of new technologies, things like that. It helps grow the economy in the province as well as helping address the issue of climate change.”

The federal carbon tax kicked in at the beginning of April for other provinces that did not institute their own carbon tax including Ontario, Manitoba, Saskatchewan, and New Brunswick. According to reports by the *Canadian Press*, the federal tax is $20 a tonne for 2019 and will increase by $10 annually until reaching $50 a tonne in April 2022. Meanwhile, the Alberta carbon tax also started at $20 per tonne in 2017, increasing to $30 a tonne the following year, but it has not been raised since due to the lack of approval for the Trans Mountain pipeline. To date the Alberta government estimates it generated $2.6 billion in revenue by the end of March, which is separate from another $899 million brought in under a separate carbon pricing system for large-scale industrial emitters first instituted by a previous Progressive Conservative government under Ed Stelmach.

Alberta Party candidate Dakota House said his party wanted to reduce the carbon tax by 1.5% for the next three years, calling it nothing but a “slush fund for the government.”

UCP candidate Dan Williams said to applause that the party’s policy on carbon tax was two words, “Scrap it.”

Williams said the tax had not and would not reduce carbon usage.

“I’m going to keep using it to heat my home and drive my car no matter how much they do that because that’s what I need to do, I live in the north of Alberta,” he said.

“It was also supposed to get a pipeline built. Well these folks who oppose our pipelines believe it as an article of religious faith that oil is evil, and taxing the living oblivion out of you and me is not going to change their mind on that.”

Williams said his party would instead defend Albertans and “turn off the taps if we need to.”

NDP candidate Debbie Jabbour pointed out that the NDP had passed legislation to do just that, but preferred to collaborate before actually enacting it.

FCP candidate Connie Russell told the crowd to go home and check out the UCP policy on the tax, saying the party would actually be to keep two thirds of the carbon tax, and only her party would truly scrap it. Russell also stated that Albertans had been lied to about climate change when answering a separate question.

Perhaps the most contentious question of the forum came down to a question UCP candidate Dan Williams asked in his opening statement.

Williams was echoing similar questions posed by UCP leader Jason Kenney. When Kenney asked the same question, he inadvertently sparked Twitter users to hashtag #betteroffwithrachel in response, a hashtag that then trended nationally in Canada with hundreds of Tweeted responses.

NDP candidate Debbie Jabbour started off her closing statement at the forum by responding directly to Williams’ opening question, saying, “To the question of whether we’re more better off now than we were four years ago, well I think the evidence says yes.”

However, she was interrupted by loud noise from a portion of the audience, the only outburst of the evening that had to be brought back under control by the moderator.

“Alberta now has the lowest rates of child poverty in the country, Alberta’s taxes continue to be the lowest in Canada, Alberta has the best balance sheet in the country,” she continued undeterred. “We have a more diversified economy with investments into partial upgrading, natural gas processing, and an expanded petrochemical sector.”

Pipelines were also a hot topic at the forum, with Williams saying, “There was four pipelines that were about to be approved when Carmon Creek was running. Now, we’re at zero. This was not the right approach. We need to make sure we stand up for Alberta and fight for our interests. That’s why we’re where we are today. Where we are where there’s 170,000 workers out of work.”

House said his party would instead use innovative ideas like pucks to ship oil to avoid the issue of pipeline spills.

After the forum, Jabbour told the Express, “You hear that constant rhetoric about the alliance between Rachel Notley and Trudeau which is simply nonsense. Rachel Notley has fought harder than anybody else for pipelines. She has also used an approach that does not kick and scream and yell and sue and make lawyers rich, which is what Mr. Kenney is promising to do.”

“I am very excited for advanced voting to begin this week and we feel a lot of momentum after the forum in Peace River,” UCP candidate Dan Williams told the Express via email. “Though, I will stay humble and work hard for every vote. My priority is talking to every voter I can.”

Advanced polls are now open. A record-breaking 140,000 people voted on the first day of advance polling in Alberta.