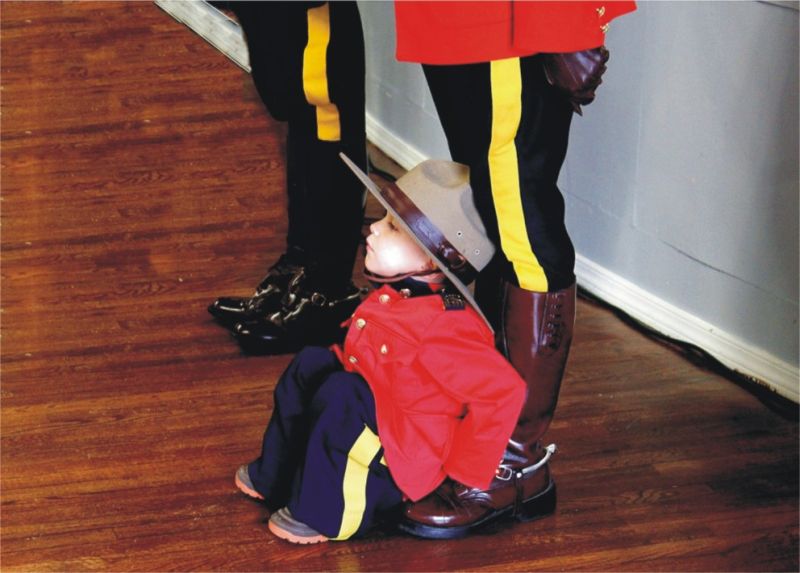 However, while it was a somewhat different celebration than the anticipated sitting outdoors on deck chairs and enjoying the barbeque, childrens games and music, it was no less of a celebration.

With a few modifications with the flag raising ceremony most of the other scheduled activities went ahead as planned.

To accommodate those who had to find their bearings because of the change of venue, the flag ceremony happened around noon rather than 11.30am with all other events going according to plan.

Francis Lessard introduced the celebrations saying that while Canada is a young country, it still has a lot to celebrate and he also acknowledged the contribution of the numerous volunteers and the many local organizations and businesses who sponsored the event.

For the flag ceremony, Lessard invited two members of the RCMP McLennan Detachment who were dressed in formal regalia to come forward and Megan McNeil accompanied the crowd on trumpet in a rendition of O Canada.

“On behalf of the Town of McLennan and the Town Council I welcome you all to the Canada Celebrations,” Kocherla said and also took the opportunity to thank the armed forces and other organizations that ensure our safety and security, a sentiment that was shared by those present and responded to with applause.

Therese Demeule, who, along with Nancy McNeil, worked on the DVD tracing the history of the Town of McLennan and Northern Alberta Railway announced the launch of the DVD, which were available for sale at the event. The DVD also played on a screen at the top of the hall.

Demeule presented McLennan Municipal Library board president Philippa O’Mahony with a copy of the video to ensure its continued availability.

“I would also like to give the library a copy of the information as well as the DVD so it doesn’t get lost to future generations.”

Approximately 1,500 hours of research and editing went into the production of the DVD.

Rewind, the four piece local band were also undeterred by the change of venue, setting up on stage and entertaining the crowd on schedule.

Numerous games were available for kids in the Hall basement and in the main hall children lined up for the always popular face painting.