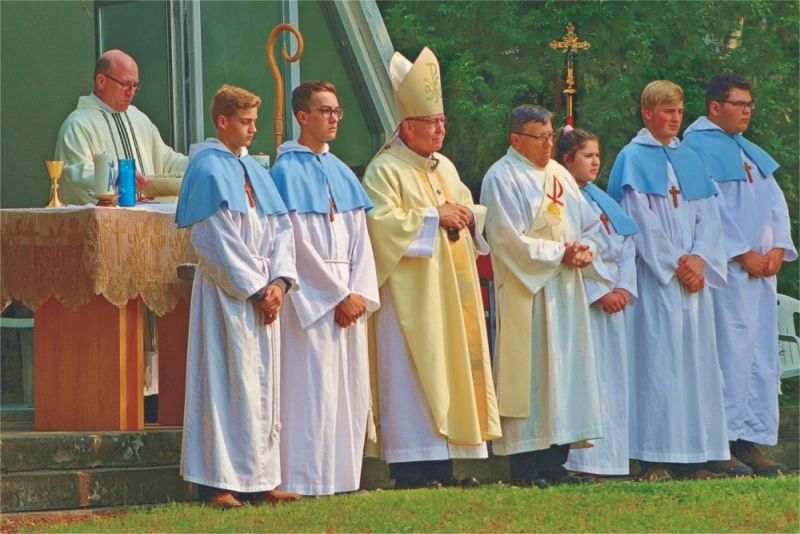 In the Roman Catholic tradition, August 15 is designated the Feast of the Assumption, the main feast celebrating the Blessed Virgin.

The Catholic celebration commemorates both the departure of the Virgin Mary from mortal life and the assumption of her body into heaven.

On August 15, the Feast of the Assumption, Notre Dame de Lourdes Parish in Girouxville held its annual pilgrimage.

The pilgrimage has taken place each year since 1942, first at a small, simple rock grotto on the same site where the current grotto was built in 1962.

This year’s pilgrimage began with the Rosary and confessions at 9.30am and a number of parishioners led the congregation in hymns, which began at 10am.

Mass was celebrated at 11am by Archbishop Gerard Pettipas who delivered a fitting homily on the meaning and value of grace.

As the pilgrimage commemorates the Virgin Mary, the Archbishop began with citing the Hail Mary prayer, in particular the opening phrase, “Hail Mary full of grace.”

Archbishop Pettipas then elaborated on how the young virgin mother of Christ had to put aside all personal plans and how she selflessly embraced that role.

He finished the sermon by saying that the Virgin Mary should be not only celebrated but also emulated.

Six priests, two deacons and the Archbishop took part in the pilgrimage, which was attended by approximately 200 people.

Reverend Jeyapaul Packiasamy, pastor at Immaculate Conception Parish in Sexsmith presented two talks at the commemoration pilgrimage, at 10.30am and 2.15pm.

An excellent lunch prepared by numerous volunteers was served in Notre Dame de Lourdes lower church hall at 12.15pm, followed by the Stations of the Cross at 1.30pm.

The pilgrimage concluded with the exposition and adoration of the Blessed Sacrament and the blessing and anointing of the sick.

Thanks to having very favorable weather, all activities took place outdoors at the Lady of Lourdes Grotto on the grounds of the parish church.