A multi-family garage sale held in McLennan’s Elks Hall on June 23 and 24, was as a fundraising initiative to help build a well in a small community in South Sudan.

The people of South Sudan contend with civil war and many communities struggle to fulfill basic necessities.

Some of those necessities such as housing, access to water and the education of young people, things that many here are fortunate enough to take for granted, are especially difficult to achieve in the midst of conflict.

South Sudan is the world’s youngest nation, declaring its independence from Sudan on July 2011 following a January 2011 vote that resulted in 98 percent of the people calling for independence.

Sharing a border with six neighbouring countries in the centre of Africa, South Sudan is primarily an agricultural based society and though it has substantial oil resources and potential wealth, it is one of the worlds least developed regions with little infrastructure, due in large part to decades of civil war.

Out of the Hut Foundation, based in Grande Prairie was established in 2004 by Abraham and Joseph Deng to help address the needs of people in their homeland of South Sudan.

The Foundation rightfully sees these needs as related and that easily accessible, onsite water in communities can have a positive influence on the education of young people, especially girls, as it would free them from the responsibility of drawing water from a distance and allow them to spend that time in the classroom.

While based in Grande Prairie, Out of the Hut Foundation has members in the McLennan who are committed to building the well in the South Sudanese community of Mading Biong.

Members of Out of the Hut Foundation involved in this initiative include Isabella Dubrule, Maxime Dubrule and Deborah Kon.

Deborah Kon, who is originally from Mading Biong now lives in McLennan with her husband Abraham Deng and both are active in helping their community back home.

“This is our first garage sale for the Out of the Hut Foundation and we have had a great response, with people coming by to ask about the foundation,” says Isabella Dubrule. “We are planning on doing some fundraising events at least once a year as we need fifteen to twenty thousand dollars to build the well. We have $6,000 now so it is going to take us a while.”

At their next fundraising project in McLennan, Out of the Hut Foundation plans to set up a booth to outline the work of the foundation and give people a greater understanding of the realities of South Sudan.

They are also planning to visit schools in the area, created awareness, and motivate the students to raise funds for the project. 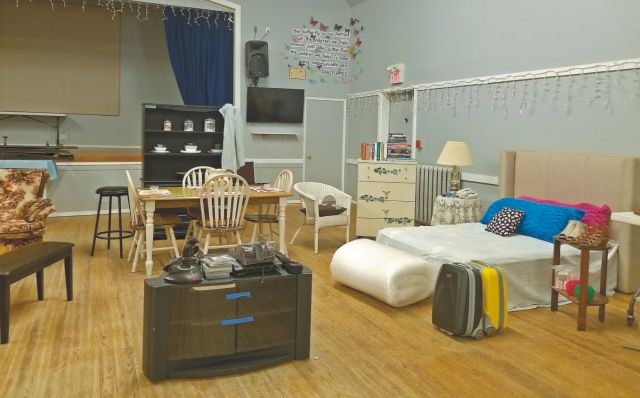