Home Events, News To you from failing hands we throw the torch; be yours to hold it high 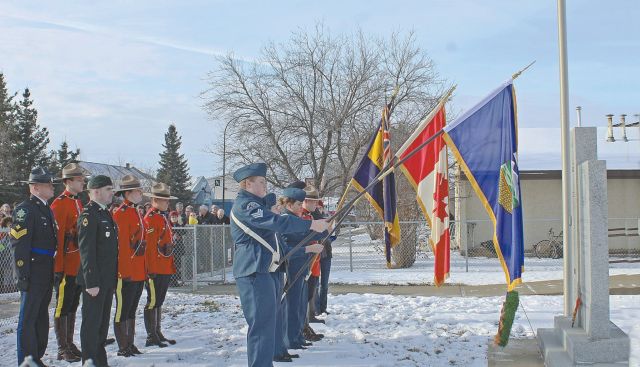 Following a rendition of “The Last Post” at the beginning of the McLennan Remembrance Day ceremony, Royal Canadian Legion President, Dave Champion called for two minutes of silence.

“During those two minutes of silence, we will remember our fallen comrades and those who have passed away since we last gathered together,” Champion encouraged those in attendance, and following the observance of silence he read a passage from the poem “For the Fallen.”

They shall grow not old, as we that are left grow old:

Age shall not weary them, nor the years condemn.

At the going down of the sun and in the morning

We will remember them.

Dave Champion also took the opportunity to remind everyone that the number of veterans is declining, bringing to mind that we had lost another this year, referring to Charles Gagnon who passed away in July at ninety-one years the age.

“But I am happy to say that we have in our presence as usual a veteran of the Second World War, Paul-Emile Maisonneuve,” says Champion.

“Paul Émile Maisonneuve is the recipient of the French Legion of Honour who will celebrate his 99th birthday in a few weeks,” says Champion asking everyone to express their thanks to Maisonneuve to which the crowd responded with a vigorous round of applause.

RCMP Cpl. Anita Doktor was the first guest speaker, who eloquently outlined the sacrifices veterans make, reminding everyone “freedom is not free.”

“On Remembrance Day, by wearing the poppy, veterans will see that their sacrifices are not in vain Remembrance Day represents our obligation to those who have served our country and today we stand somber and silent with poppies close to our hearts and take the time to remember, least we forget.”

Captain Verna Ogg of the High Prairie Air Cadets Squadron 539 who spoke about women’s role in the Military, dating back to 1885 and how women always contributed through nursing, manufacturing, farming before becoming an integral part of the Canadian Military.

After singing “Let there be peace on Earth,” Frances Lessard gave a presentation on the Vimy Ridge, a seminal event that many credit as the moment Canada became a nation.

Lessard showed numerous historical photographs along with more current images taken when he and local students visited the site.

Chantal Laflamme received the H.W. Fish Bursary though unfortunately she was unable to attend the ceremony.

The Order of the Royal Purple bursary was presented by Yvonne Sawchyn to Jacob Johnson, a former G.P. Vanier student who is study criminal justice in Lethbridge and is also planning to sign up for the army reserve.

On behalf of the McLennan Legion, David Champion presented an annual cheque that the Legion gives to the High Prairie Cadet Squadron.

“We don’t have a cadet squadron here in McLennan in a long, long time but we do like to support them with a little bit of money,” he said as he presented the cheque to Captain Verna Ogg.

Champion also acknowledged that there were three Air Cadets present at the ceremony, one from Peace River Squadron and two from the High Prairie Squadron.

The singing of “This Land is Your Land” following that the presentation of the wreaths and at that time Champion gave special mention and expressed appreciation on behalf of veterans and the Legion to the “No Stone Left Alone,” program now in its second at G.P. Vanier.

The “No Stone Left Alone,” students lay a poppy on veterans graves at all cemeteries in the Smoky River Region.

Vanier’s participation in the National program was initiated by and is coordinated by G.P. Vanier teacher Marion Lessard.

Following the ceremony at the Elk’s Hall that concluded with a rendition of “God Save the Queen,” and a parade to the McLennan Legion Hall, there was a short service at the cenotaph.

Following the laying of the wreath at the cenotaph, coffee and sandwiches were served at the Royal Canadian Legion Hall and at 6 pm, the by donation, traditional Remembrance Day roast beef supper was also held at the hall. 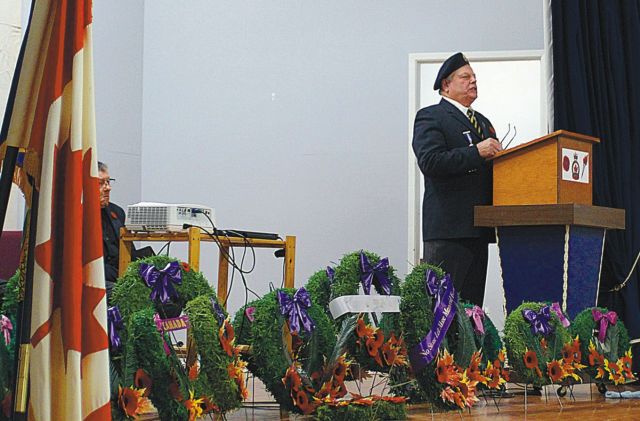 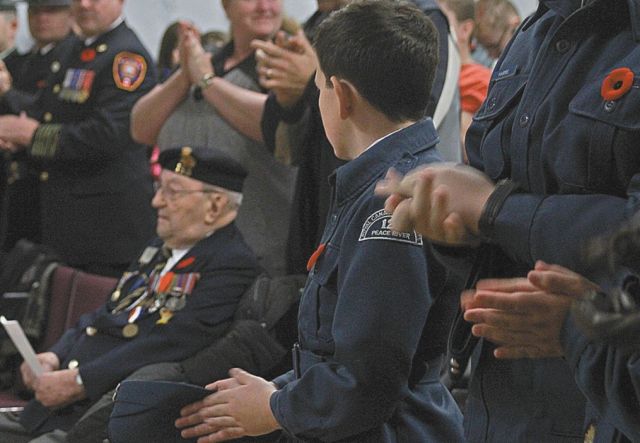 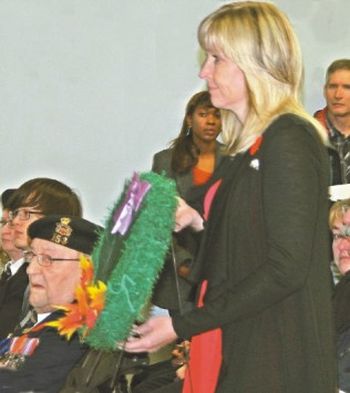