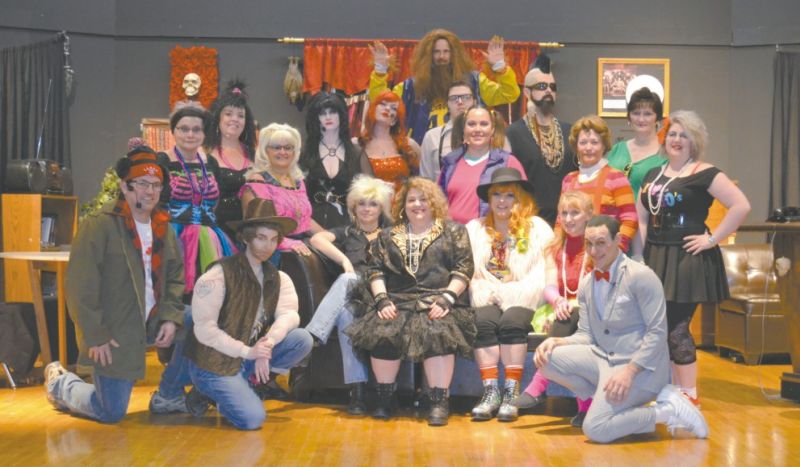 March 7, 2018 –
LAHF Troupe makes the 80’s come back into fashion!!
Introducing Crocodile Dundee, Teen Wolf, Pee-wee Herman, Jessica Rabbit and the rest of the 80’s all-star cast!
LAHF Troupe held their great whodunnit dinner mystery theatre at the Jean Cote community centre on Feb. 24, the first of two performances, with the second held on March 3.
This year’s production is entitled ‘Like, Oh My Gosh … It’s a Murder’, with the crime taking place at Ozzy Osbourne’s mansion.
Many hours of work went into this production.
“It’s a group effort,” says Director Lise Poirier. “It took the full two months to do the decorations and the tables.”
The hall was elaborately decorated in an 80’s theme. The walls were adorned with ‘Pac-Man’ and ‘Super Mario Bros’ videogame characters and the guest tables had themes like ‘Star Wars’ and ‘Sesame Street’.
The 80’s music added to ambience.
Pee-wee Herman, played by Jason Talbot, offered guests an “Electric Popsicle” as they entered the hall, which was LAHF Troupe’s version of a melon orange shooter.
Each performance consisted of a four-act play and a three-course meal. The Grade 12 students of Ecole Heritage helped serve the dinner and handled the coat check.
Many guests wore 80’s attire and there were prizes for best dressed male, female and couple for each performance.

March 14, 2018 –
Singing and artworks highlight Gala du Nord at Centre Chevaliers
The French culture featured prominently at the Gala du Nord, held at the Centre Chevaliers in Falher during the evening of March 6.
Students of Ecole Heritage performed songs on stage, often with the guitar talents of Joel Lavoie, as well as other musicians. They sang songs in French and there were many examples of their artworks found throughout the hall. Joel Lavoie takes great pleasure in seeing the students’ talents shine brightly.
“As musical director for the ‘Gala du Nord’, it’s always a pleasure to see the work that all the kids put into the songs and music – and the art! – come to fruition on stage,” says Lavoie.
“And then, to see the smiles and pride on the faces of the parents, friends and family after the show, it really fills me with joy.”
Principal Nicole Walisser offers similar sentiments.
“It was a very proud evening for École Héritage. To see our students celebrating their talents together, in French, is simply amazing.
The Gala showcased the talents of our students in art, music, theatre and dance,” says Walisser.
“The passion of the Café Nord-Ouest parents and Héritage teachers was evident – you could feel the energy in the room. This was a high-quality exposition of talent – our students were in the spotlight.”

March 21, 2018 –
The Twilight Figure Skating Club does a ‘Musical Time Warp’
The skating splendor was evident through each performance, from beginner to advanced, as each child demonstrated their skills and panache on the ice.
The Twilight Figure Skating Club held their ‘Musical Time Warp’ at the the Guy/Donnelly Sportex in the afternoon of March 11.
The performances were based on songs from the 1940’s to the present day, and the boards were decorated in artwork accordingly.
The event opened with Janelle Lanctot and Erica Lasante going out onto the ice with the Alberta and Canadian flags, respectively, for the national anthem.
Then individuals and groups demonstrated their skating skills to music according to their theme.
Nathaniel Reid offered two solo performances, including one to ‘Seasons of Love’ and later, he skated to to ‘Fight Song/Amazing Grace’.
Members of the CanSkate Group 2 – consisting of Kaley Dusseault, Mieka Drapeau and Anabelle Morin – skated to Ricky Martin’s ‘Livin La Vida Loca’.
Five skaters – Zachary Lasante, Erica Lasante, Janelle Lanctot, Hannah Garant and Alannah Dubrule – dressed in the ‘Flower Power’ guise of the 1960s and skated to The Archies ‘Sugar Sugar’. Hailee Campbell offered solos to ‘Roxie – Chicago: Original Broadway 1996’ and ‘Halelujah’.

March 28, 2018 –
G.P. Vanier strikes up the band for its 15th annual fundraiser event
Georges P Vanier’s 15th annual Strike up the Band dinner, performance and silent auction took place on Saturday March 17.
Eighty-five of the school’s 107 band students performed at the event, while also wearing a different hat waiting and bussing tables to ensure that the over 180 people who attended the evening were well looked after.
Band teacher Brock Whalen welcomed everyone and thanked them for their support.
Mr. Whalen is completing his first year as Band Teacher having taken over the role from Pam Heckbert who was appointed G.P. Vanier Principal last year.
“I am enjoying my time here a lot, it’s been a definite learning experience,” says Whalen.
“And I am really enjoying the kids and the support we have here.”
The level of proficiency of a school bands is designated in five levels with Vanier band students certainly on par with other school bands.
Vanier Grade 7 band is at a level 3, Grade 8 and 9 are at level 2, and senior band is level 3.
Level 4 is between advanced high school to university and 5 is university level.
“So we are exactly with everyone else in this region,” says Whalen.
“We were at the Peace River Festival on March 14 our grade 7 band got honors and our senior band got distinction. We have our Grande Prairie Music Festival on April 16 and 17, which is a provincial wide festival and all our bands will be performing there and will play most of the sections that they play here tonight.”
Grade 7, Gade 8 and 9 and senior band performed during the evening playing an eclectic repertoire of pieces such as “Canto,” “Power of Love,” “Whale Warrior,” – Lady Gaga mix – The Blues Brothers “Peter Gunn Theme” and a piece entitled “Chasing the sunlight.”
The roast beef supper, refreshments and dessert were excellent and the students did a wonderful job of catering the event.
Following the draws, silent auction and fifty-fifty the Senior Band played the final piece of what was an extremely enjoyable event.