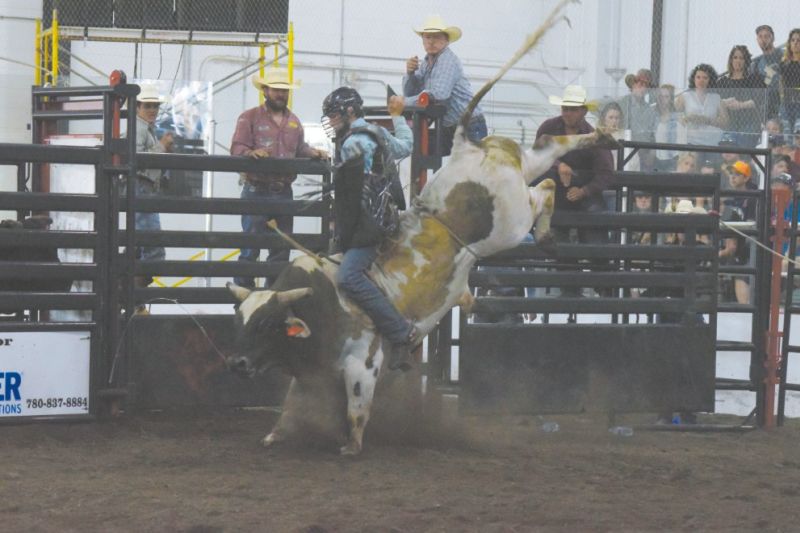 June 6, 2018 –
MLA praises federal government’s purchase of the Trans Mountain Pipeline expansion as in the interest of all Canadians
NDP MLA Marg McCuaig-Boyd is praising the federal government’s decision to purchase Kinder Morgan’s stake in the Trans Mountain Pipeline expansion.
“This deal puts people to work, building the pipeline right away, creating good jobs,” said McCuaig-Boyd during a teleconference with reporters on May 29. She also noted that the Alberta Government could invest up to $2 billion.
“That investment, I assure you, will only be payable once oil begins to flow through that pipeline. At this point, our investment would be converted to into equity, should we invest, ensuring value for any investment dollars that are Alberta tax dollars.”
On May 29, the federal government announced that it would spend $4.5 billion to purchase the Trans Mountain Pipeline and the company’s core assets.

June 13, 2018 –
Six Ecole Heritage students nearly ready to enter the world, church service & banquet held
The school year is nearly over and six of Ecole Heritage’s Grade 12 students will soon make their way into the world to engage in new adventures. Ecole Heritage held a church service and banquet for the soon-to-be-graduates on June 2. The church service was held at the Ste. Anne Paroisse in the afternoon, with Deacon Reg Bouchard and Father Jean Nkuanga presiding over the celebration.
This included communion for parishioners. Also, graduates brought offerings to the altar, a wagon filled with a sentimental item representing each graduate, and Principal Nicole Walisser brought the certificate of completion of studies and a framed photo of the Class of 2018. Staff Joel Lavoie, Charles Marinier and Chantal Roy and Grade 11 student Nadia Sylvain performed a series of songs during mass.

June 20, 2018 –
Knights of Columbus tenth annual Children’s Fishing Derby
The tenth annual Children’s Fishing Derby at Winagami Lake Provincial Park took place on Saturday June 9, with a cold breeze coming off the water, though things warmed up somewhat in the early afternoon.
That cold, rainy conditions were forecast probably acted as a deterrent for many, as the turnout was rather small with just over 30 ids registered for the event.
However, even with thirty or so participants, adding family and friends to the numbers there was a good crowd attending the overall event and the kids participating in the derby had plenty of room to try their luck at different spots along the breakwater.
The Knights of Columbus McLennan/High Prairie Council has put on the event for the past ten years with the support of municipalities, businesses and individuals in the region who donate the numerous prizes for both the derby winners and the items available in the draws: such as kids bikes, power tools, fishing gear, the grand prize of a plane ride and a great deal more.
As with any event that depends on the weather the outcome is always uncertain but nevertheless, the same energy and attention to detail is still demanded of the organizers and the same number of volunteers need to be on hand.

June 27, 2018 –
Lots to see and do at the Honey Festival
The Honey was a ‘phenomenal success’, touts the committee chairperson, Geoff Turnquist.
“Everything was a sellout,” says Turnquist. “Everybody came together this year. Everyone wanted new and exciting things and we delivered.”
The Honey Festival kicked off in the evening of June 15 with a couple of events. At the Centre Chevaliers, the ‘French Toast’ band and others performed for a large audience, singing songs in French. A dinner was held as well.
Also, lots of groups braved a gauntlet of water as part of a relay race in front of the New Horizon Co-op on Main Street. They raced in teams and had to put on beekeeper outfits, match letters together at a table and then run a water gauntlet at the end of the block to pick up a stuffed bear dressed in a beekeeper outfit.
The Falher Regional Pool was also filled to capacity with swimmers for the midnight swim, with a lineup outside the gates at around 10:30 p.m.
The main events were held on June 16. That morning, councillors and staff for the municipality served a pancake breakfast in the Falher Regional Recreation Complex.Outside the FRRC, the 5K & 10K walk/run through the community was held.
In the evening, Professional Bull Riding PBR Canada held a competition in the FRRC.