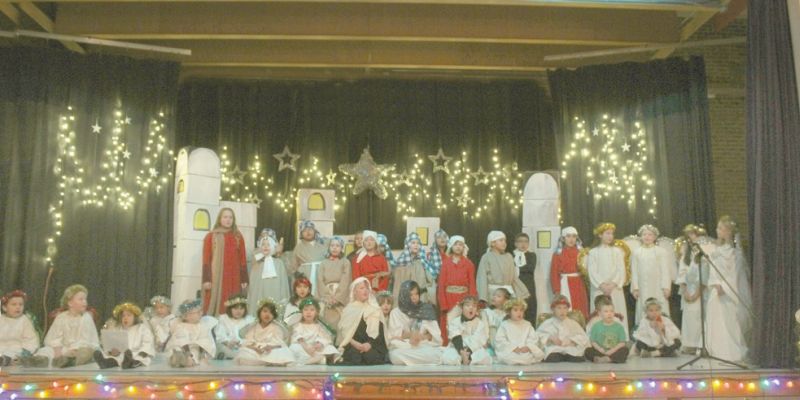 January 3, 2018 –
Providence students deliver a great performance at Christmas concert and supper event
No matter how young students may be, to act in a nativity play or more correctly to enact the nativity, they are always mindful of the reverential nature of the theme but also experience the usual nervousness and pride in taking to the stage in front of an audience.
While there were a number of prominent roles in the Ecole Providence Christmas play, the production, under the tutelage of Garry Fisher and school Principal Krista Veitch, was a unified and collaborative offering with all students making an essential contribution.

January 10, 2018 –
Having had to cancel the last two years, Villa residents are happy to hold their 2018 New Year’s Party
Residents at the Villa Beausejour celebrated their New Year’s party on Friday afternoon, December 29. The Villa has approximately 70 residents currently and some family and friends also visited to participate in the celebrations, to enjoy a glass of Champaign or Champaign punch, play bingo, sing songs and listen to live music played by Phil Dube and Raymond Rey.
The Villa normally has its New Year’s party on the Friday prior to New Year’s Day but for the past two years they didn’t have it because it was on breakout.
“When we are on a breakout here we have to stop all activities to try and stop the spread of viruses,” says Villa Beausejour activity director, Leas Roby. “So for the past two years we were on a breakout so I wasn’t able to have my New Year’s party. So this was the first time in two years that we finally had a party and they were happy because they really miss it.”

January 17, 2018 –
New doctor in McLennan excited about settling in to working and living in the region
Doctor Pierre Cloete’s first official day working at the McLennan Medical Building began on September 9 though he did a meet and greet with patients the day before. Having arrived in Canada in September, Dr. Cloete spent three months working in High Level before coming to McLennan.
Cloete is from South Africa and following graduation he practiced family medicine, then worked as a doctor on cruise ships for two years just prior to moving to Canada.
“I decided to go to the cruise ships, just to explore a bit, to see the world and meet different nationalities,” he says, but adds that it was something he decided to do for a limited time.
“For me, being on the cruise ships had an expiry date. Initially I planned to stay for a year but then I was promoted to senior doctor on the ships so I stayed for another year and then things just fell in place for me to come here to Canada.“
As an energetic person who enjoys being outdoors close to nature, being relatively close to the mountains, he sees this area as providing a great many opportunities.

January 24, 2018 –
Let’s enjoy a Ukrainian celebration!!
It was a big night for the Zirka Dancers, from the youngest to the senior performers, with twists and spins to Ukrainian folk music.
The Zirka Dancers entertained guests at the Guy community hall in the evening of Jan. 13. A Ukrainian dinner was held beforehand, requiring the efforts of more than 15 volunteers.
“The community really pulled together, a lot of volunteers came out to help,” says Simone Gagnon, president of the Guy Sports Committee and one of the organizers.
Over 200 people attended the event. The dinner consisted of sausages, cabbage rolls, perogies, cottage cheese pancakes, salads and corn dishes. Dessert consisted of blueberry perogies, fruit-filled buns and fruit salad.
The event was a fundraiser for the Guy Sports Committee, with the proceeds going to building improvements.
The Zirka Dancers performed following the dinner. Later, the Guy Sports Committee presented a donation of $1,220 to them.
The local band, Rewind, performed later.

January 31, 2018 –
Héritage student gets valuable parliamentary experience with the FJCF’s “Parlement jeunesse pancanadien” 2018
École Héritage student Aaqilah Rahim recently visited the Canadian Parliament in Ottawa as part of the Fédération de la jeunesse canadienne-française (FJCF) Parlement jeunesse pancanadien 2018. The FJCF National Youth Parliament brings to Ottawa approximately 100 young francophone Canadians from across the country.
The participants, ranging in age from 16 to 25, get the opportunity to play a role within parliament and learn about politics through that experience.
Of the youth from across Canada, Rahim who is in Grade 9 was the only student from northern Alberta chosen to participate in the 4-day event from January 11 to the 14.
This was not Rahim’s first time in Ottawa but it was her first time there as part of the Youth Parliament experience.
“There was about 75 youth and the rest were adults but I was the only one from northern Alberta. There were ten people from Edmonton who were all adults and another youth from Lethbridge.”
Rahim says she found so much that was exciting about the experience but what interested her most was meeting likeminded people interested in politics and leadership.
“It was just so cool to meet new people but I also met some people that I knew already from previous functions,“says Rahim.

Hospital staff help raise money for FCSS Christmas hamper program
Smoky River Family and Community Services received a generous donation in December, courtesy of the staff at the Sacred Heart Community Health Centre in McLennan and the United Way.
Staff in all departments started raising money in November and they, along with the United Way, presented a cheque for $678 to Smoky River FCSS.
“It was great to see staff support a worthwhile cause,” says Barbara Mader.
Staff held three fundraisers: a hamper basket raffle, the donation tree in the hospital and a 50/50 raffle.
Lynn Florence, the director of Smoky River FCSS, appreciates the donation and the money was made part of the organization’s Christmas hamper program.